Details
By Avi Quijada
Category: All Things Quijada
On June 27, 2015 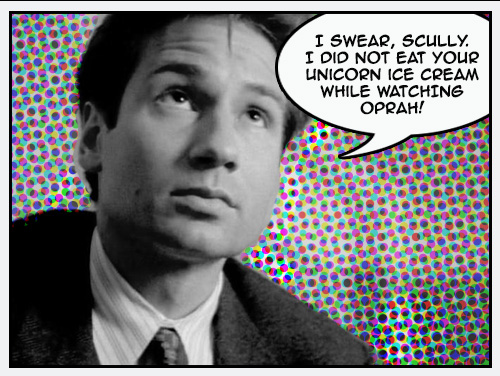 Let’s get real, the minute that you learned that The X-Files were coming back, you had that instant pang to rewatch the whole series. Out of nostalgia or just to get ready for the awesomeness that’s to come.

That feeling comes with either a sense of excitement that makes your heart skip more than one beat or, you know I’m being honest, a groan… because two hundred and two episodes, and two movies, don’t go by too fast. At an average of forty-three minutes per episode and movies around the 120 minute mark, you’re going to be watching 8,926 minutes, or approximately 149 hours, of awesome, heart-wrenching storytelling.

So this is how I found myself persuading a cohort of mine on Twitter to watch The X-Files for the first time, promising to deliver her a guide of sorts, of what to do whenever she gets assaulted by “the feels”. Aside getting yourself a re-watch buddy so you have a hand to hold, instructing your dog to understand irrational gasping and sobbing, and convincing your cat that if you put your fist through a wall this is not cause to attack you… food is the next best thing to deal with the emotional onslaught. Continue after the jump.

I set out to investigate this. “How do X-Philes eat their feels?” I asked myself. I took it to Twitter and Facebook, and I was pleasantly surprised by some of the choices, some of you are very sophisticated, but the big winner is the good ol’ cheese doodle. We’re indeed kids of the ‘90s. I consulted with culinary experts, and by that I mean my brother, as he happens to be a chef with extensive snacking experience. He’s also a huge fanboy himself, so he understands the struggle. Priceless input came out of that. I asked my mom, but she looked at me funny, so I just moved along. I knew I had something valuable here.

I didn’t want to deliver a general recommendation of what to do, because humans are more complicated than a one-size fits all solution. So here goes my snacking suggestions for season one, plus some key tips for particular and significant episodes that require special culinary intervention. If you're new to the show, some very light spoilers may be included in these arguments.

Season One’s culinary identity: All the crunchy stuff! If this season were a dish, I’d go for a fusion version of a plate of loaded nachos. 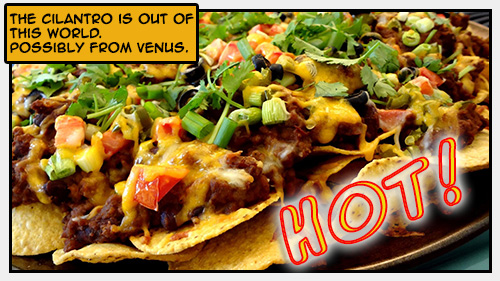 This is a season of discovery; we’re getting to know these characters, and intrigue and angst follow Mulder and Scully at every turn. For the newbies, this is the moment when you choose to believe or not, to give a chance to this show or not… it is the moment when you learn what truly is to be on the edge of your seat.

Starting from the "Pilot", my general recommendation is popcorn, potato chips, cheese doodles - go for the baked ones… I mean, I don’t want you to be completely unhealthy, so maybe throw in some goat cheese, celery sticks and carrots for good measure. You won’t eat them, but it’ll make the food porn pictures and Instagram selfies more respectable. There’s also a reasoning to this: there’s absolutely no way that you’re going to be able to look away from the screen. You’ll need food that requires minimal hand/eye coordination. If you want to up the ante, and prove that you can do it all… I suggest sunflower seeds. See how much of the actual seed you can get. If you want something sweet, I suggest a popsicle. I’ll leave it up to you to decide in which episode you shall use this emotional relief. Don’t abuse the liquids though. Hitting pause to go to the bathroom is anticlimactic.

Now for the episodic recommendations: 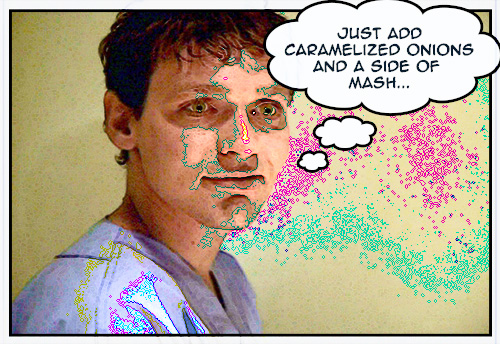 First, the warnings: for the love of all things sci-fi, don’t pick this day, for either of these two episodes, to relish on a liver steak, or a pate sandwich. Don’t even feed your dogs liver flavored treats. I would also stay away from gravy and hot wings. Trust me on this. You’ll thank me later.

For this duet, I would suggest a nice glass of wine, because there’s a level of angst whenever we spot Eugene Tooms inside of Dana Scully’s apartment. If you don’t drink, I’d then suggest some soothing chamomile tea, or a couple of snack-sized chocolates. But don’t go crazy, complement with crunchy things. You’ll need to keep your chocolate intake controlled if we’re going to make it through this. Or you could just bite the bullet and start drinking steadily to train that aforementioned liver that Eugene craves. We’ve got a whole lot of episodes to go and the angst is only dialed up as the seasons move along. 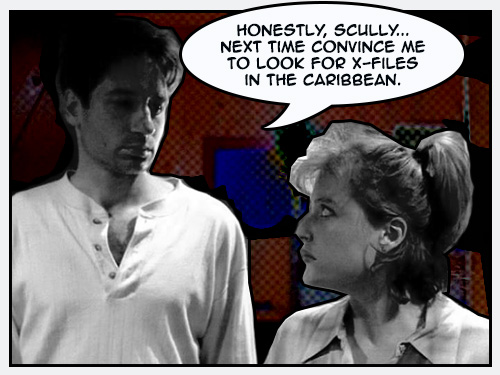 If you want to go for the easy theme, how about a nice jug of shaved ice? I hear the green apple syrup is a winner, though I favor the cherry. You can complete that easy theme with some gummy worms, and let your blood sugar levels have a field day. If it’s too soon and your stomach can’t take the sight, this is one episode that’s supercharged with angst. I would really recommend going for a half to three-quarters of a chocolate bar, maybe a nerve-calming beer, and definitely keep the popcorn flowing. Fair warning: don’t put anything near your mouth whenever Scully goes to talk to Mulder while he’s locked away. Just let your feels flow, and counteract later. Also: no food during the worm extractions. Spare yourself the retching. You’re welcome. 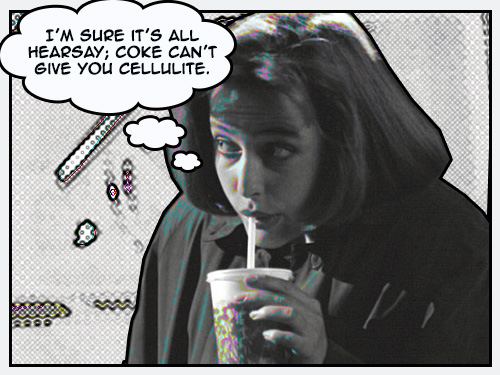 You know you’ll have to have diet cokes throughout, so tease the young newbie with some green powdery stuff in their cup and you’re set. This is another crunchy food episode, with lots of twists and turns and a definite need for attention to every detail. Maybe this is the day that you introduce cheese cubes into your diet for real, some cheddar or colby jack, because this episode doesn't kid around, the cheese level is ZERO. 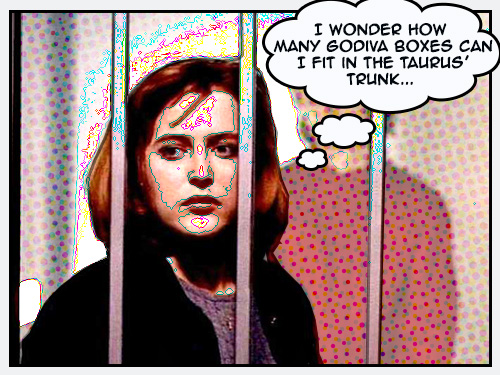 Here’s where you break out the wine, the full bar of chocolate - we suggest Chuao’s Bacon chocolate, the novelty size Toblerone, or a medium sized jar of Nutella. Hell, a recent discovery for us was dipping potato chips in chocolate. Again, you can thank me later. Some of you may want to take a shot of whiskey, in case Scully strikes you straight in the feels. Have tissues at hand. Definitely needed. And a pillow for hugging/throwing probably wouldn’t go astray. Double fudge chocolate ice cream might be in order as well. 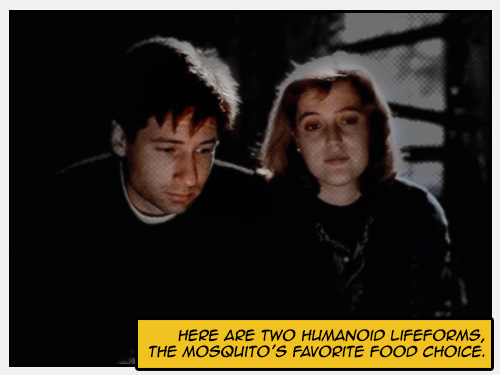 I’d say this is not the day to take your watching experience to your outside deck, or while camping, no matter how great your summer is going. And perhaps, this is not the day to watch The X-Files with no lights on. You can please "The Barenaked Ladies" any other day. It’s definitely not the day for BBQ. Stay away from the bugs too, so no crunchy grasshoppers covered in chocolate for you today. To serve as some kind of relief and remind yourself that you’re indeed in the middle of civilization, order a pizza. Maybe something fancy from CPK, or your gourmet pizza joint of choice. This episode allows you the luxury of paying more attention to your snacking than usual, but don’t plan for a full course meal, either. 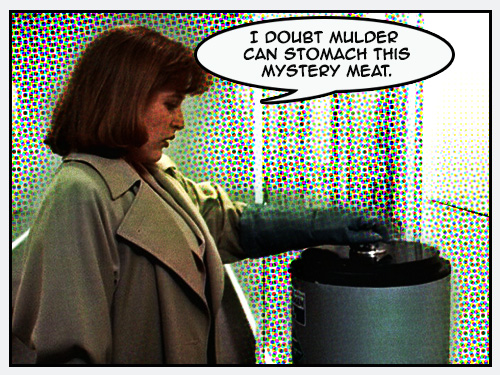 This is not the time to pick your meal from your array of frozen TV dinners, or anything that you may have saved in dry ice or in your frosty freezer. I’ve warned you. Everytime I see this episode all I can think of is Costco freezers at full blast, and I dread that I’m going to find some ungodly secret squirreled away in a canister somewhere behind the bulk cheeses.

This is the ultimate episode, where you want all the crunchy things and a beer for the final part of the season. I don’t particularly feel this is an episode for sweets, it’s more on the thrilling and suspense side of the spectrum than the angsty emotional fest.

Now, there’s also the option to not eat at all during your TV watching, and I commend you for that. You’ve proven to have superhuman control over your feelings and coping mechanisms. But, isn’t life sweeter and more tasty the other way around? You’ve signed up for a TV marathon of epic proportions and you deserve a little treat for you troubles. Indulge! Experiment until you find your X-Phile menu.

To plan out your food shopping for the next few weeks, I recommend that you check our X-Files Rewatch Calendar to see just how much liquor, corn, and chocolate you have to haul to see you through this load of X-Files awesomeness.

Check back soon for my season two recommendations, and please share your own snacking preferences in the comments!