Details
By Avi Quijada
Category: All Things Quijada
On September 18, 2015 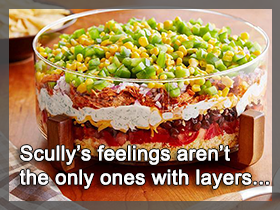 And so we’ve landed at the unbelievably angsty season four. These episodes are highly emotional and filled with some of the most solid performances of the series. The partnership is challenged by many factors; old enemies come back to haunt them, and new dangers arise. But isn’t that what The X-Files is all about?

We wouldn’t let you go without our usual list of emotional snacking, so click after the jump for Season 4’s edible companions.

Here’s the deal about this season: for effective watching, your eyes have to be glued to the screen. So anything that requires utensils is out of the question, in fact I would even recommend one of those ridiculous hats that hold your beverages. Wine comes in cans, right? And pouches too. Purchase a couple dozen “Mommy juice boxes” and make your viewing easier on yourself.

It is a convenient coincidence that we’re just starting football season now. So if you’re in the US, there will be a variety of options for game day, and let’s face it, when it comes to The X-Files, every day is game day. There’s a joke in there about how these writers play with our feelings, but I won’t swim to those darker waters… yet.

From beginning to end, this fourth season leads you through Scully’s journey, and without spoiling my dear newbies, it will be painful. But fun. Yes, I know that sounds wrong. But being something of a masochist comes with the territory of being a Phile. Embrace it.

Going into generalities, if you don’t want to get too complicated, you should be stocking up on these basics: chips, grissinis, ranch dressing or dip, veggies, tortilla chips and at least some type of chocolate sauce with an assortment of cut up fruit. That is the very basic recommendation. For a few staple dips you’d enjoy, I’d recommend Guacamole - it’s fresh and healthy - and for the more fattening choice, why not go for a “Six Layer” dip? Mmm, fattening. Drown your Scully-sorrows in saturated fats.

Please, don’t forget the wine or which ever alcoholic beverage you favor. We’ve been talking about how we want to spare your liver from damage but this is it, guys. We’ve been preparing for these episodes, but given that we’re only on Season Four… let’s still enforce some caution.

Let’s get on with the specifics. 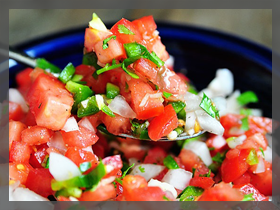 I’m going to pretend that by now you have developed a strong stomach. Any doubt about your ability to hold on should be discarded if you expect to even eat a piece of candy during this episode. If we’re going to embrace the theme, a Pico de Gallo and tortilla chips would actually serve some purpose or a roasted pepper dip. Extra points if it’s the Lebanese kind. Pork rinds can even complement the homage… but really, with how disturbing this episode can be, I would commend you if you manage to eat anything.

“The Field Where I Died” 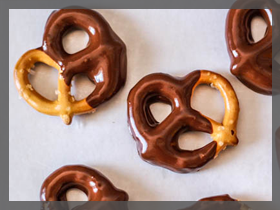 My brother tried to figure a Kool-aid dip to honor this episode. His theory was that it was a dessert and that the theme needed to be celebrated. The result was a frost like cream that will probably end up covering our next cake and my brother has decided to end his days as a sweets chef.

Even so, this episode is emotional, very emotional. And he had the right idea, you’d need the sugar to lessen the blow when it comes to Mulder’s exploration of his past lives. So, this is when you break out the nutella and the pretzels. I discovered this while binge watching last year and never looked back. Effective, very effective. Counter with a salty dip, like a blue cheese or asiago, it will match Mulder’s tears.

“Musings of a Cigarette Smoking Man” 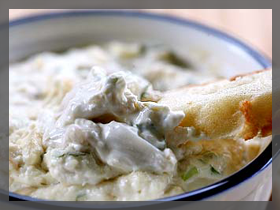 Finally a break from all this emotional slaughter. I’ve always loved how even while this episode does have some very important moments of discovery about CSM, for me it is comedy at best with some intriguing sections. So indulge in the lightheartedness of it all with some awesome nachos or even a seafood/crab dip. Sure, once in awhile reach for a peanut butter cup or an English toffee. But they're gone too fast and the taste is fleeting. You’ll end up with nothing but broken bits filled with hardened jelly and teeth-shattering nuts. And if you're desperate enough to eat those, all you got left is an empty box filled with useless brown paper wrappers. What I’m trying to say is: Stick with the dip. 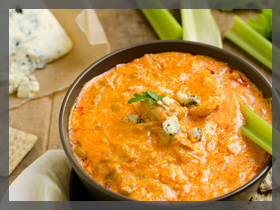 I debated whether to include these two on the list, not because they didn’t deserve it, but because I could end up just giving you recipes for all the episodes at this rate! The emotional snacking could go on forever with this season.

Filled with manly scenes, these two episodes deliver a healthy dose of action comparable to a sudden-death championship game. Mulder and Krycek reunite, we delve into the depths of the mythology and so into the deceptive tendrils of the syndicate power play. Break out the potato chips and the spicy dips such as a chipotle-mango-peach, spicy queso or even a hot wing dip to boost that masculine energy. Mulder surely will need it after out-running some horses.

This combo is a thrilling one, and thank god, because what follows is a trilogy of feels, even though it wasn’t quite designed like that. 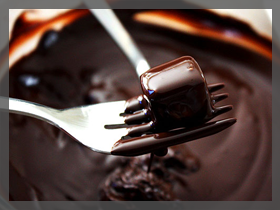 Okay folks, we’ve reached what for me is the peak of this season. This is it. This is when you take out all the gear, load that beverage hat with copious amounts of wine, or like Keva Andersen recommended, you could also go really “fancy” and get yourself a “Wine Rack”. This is the description from Amazon: “Comfortable sports bra with polyurethane bladder holds 25 ounces of your favorite beverage.” I’m sold… so long the beverage is wine, all the wine.

Bring out every piece of chocolate you have in the house. Bonus points if you make a chocolate dip to dip pieces of chocolate into. It is just that painful. Do not skimp on the calories. You’re going to need them, what with all the gut-wrenching angst and ugly-sobbing you'll be doing.

These episodes weren’t even thought out as pieces of the same storyline, but they just go together, as the descent into Scully’s emotional journey and the shift of Mulder’s quest. I’m not going to go into details because really who wants to spoil this suffering, just load up on chocolate and wine and ride the wave. 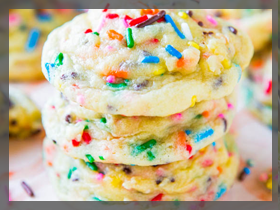 After I made an executive decision to skip the rest of the episodes, just because I can only cover so many feely recommendations about food, I considered that if I were to cover one more episode that should be supported by some emotional snacking, “Elegy” is my choice. Personally, I’d probably go for the chocolate again, but running the failed kool-aid frosting idea by Keva, she pointed out our mistake. Homemade stuff is alright, but for this you gotta leave it to the pros. Make best use of the nostalgia that the food industry is going through right now, rush to the cake mix section and pick up a tub of rainbow chip frosting from Betty Crocker. Then stroll to the cookie aisle and grab some vanilla wafers or chocolate chip cookies if you really want to go all the way. Now… dip. I won’t tell you this will be great for preventing diabetes, but it will definitely dull the pain you’ll be feeling via Scully’s struggle.

See you in October, when I’ll give you pointers on how to find an edible way to sail through an equally traumatizing set of episodes from The X-Files.