Blog: How We Stopped Worrying and Learned to Love the Bee

Details
By Roileigh Ollson and Jessa Schlitt
Category: On The Verge
On June 26, 2015

We, Roi and Jessa, strive to solve the most unanswerable questions here on our blog On the Verge. We start by sitting down with a nice bottle of Pinot Noir, preferably from the Sonoma Valley. We then meticulously take notes and discuss the fine details of questions proposed to us while listening to Vivaldi’s Seasons. It takes time, calculation, and a fierce desire to see the truth brought to light.

Just kidding. It usually begins with Jessa calling Roi on her way home from work, spitballing ideas, and then accidentally stumbling upon a golden revelation. Does everyone remember the Africanized honey bee/the-antithesis-of-Barry-White bee from the hallway scene from Fight the Future? We sure do. However, what we are about to tell you will turn your world unrecognizable and upside down. Yet one thing will remain the same—we will be your friends and we will tell you the truth. We will be your constant, your touchstone.

Wait, what? Click the link below to read more. 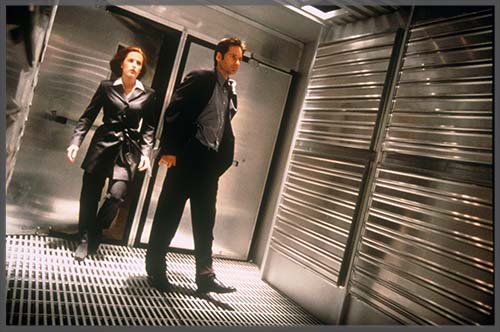 I think we all can remember the first time we saw the infamous hallway scene from Fight the Future. It had been five-ish long years of unresolved sexual tension—years of will they or won’t they. All of this culminating with Mulder’s declaration, the astonished look in Scully’s eyes, and that forehead action that almost proved the theory of spontaneous human combustion. Then we saw it; the look that said “yup, this is happening; we’re totally making out.”

And then that motherf@#$ing bee! That ASSicanized honey bee stung Scully and ruined a perfectly good moment. We hated bees from that point on. Jessa blamed every single living bee on killing the mood even though she was well aware that bees are vital to the survival of humanity based on their pollination of necessary crops and other plants to feed and sustain an ever-growing global population. Sure. Fine. Whatever.

That is, until we both realized that the bee that stung Scully in Mulder’s hallway actually saved her life. Goddammit.

In Fight the Future, Mulder and Scully travel to the middle of nowhere Texas chasing phantom tanker trucks. They proceed to run through some giant jiffy pop poppers where thousands of bees are released, yet both agents escape seemingly unharmed. They were then immediately chased by helicopters through a corn field, yet made it out further undisturbed. All of these were opportunities that the Syndicate could have done away with both Mulder and Scully, but they had other plans.

Alvin Kurtzweil noted to Mulder that despite the fact that Mulder and Scully had been chased from Texas by two black helicopters, they were allowed to leave because, “These people [behind the conspiracy] don't make mistakes.” The Syndicate knew what they were doing…presumably. They were even watching Mulder outside of the bar Casey’s after he spoke to Kurtzweil.

Quite simply, the consortium wanted Agent Scully dead. As stated by Strughold to the rest of his cool-hearted cronies in Fight the Future: “we must take away what he holds most valuable.” The scene immediately shifts to a shot of Scully, hinting that she was what Strughold was insinuating that Mulder cannot live without (ummm, duh?). After all, Scully has always been used as a tool to control Mulder. If she would not dismiss Mulder’s work as unscientific and unsubstantiated, then she would be used for other methods of control.

Since the members of the consortium are the same Syndicate that we see in the episode “The Blessing Way”, it is likely that they would have used the same methods that they planned to use for her assassination in season 3:

WELL-MANICURED MAN: They'll kill you one of two ways.They'll send someone, possibly two men. They'll kill you in your home or in the garage with an unregistered weapon which will be left at the scene. Using false documents supplied by associates of mine, they'll be out of the country in less than two hours.

SCULLY: You said there were two ways.

WELL-MANICURED MAN: Yes. He or she will be someone close to you. Someone you trust. They'll arrange a meeting or come to your house unexpectedly.

After leaving Texas for the second time, Scully quickly returns to Washington, D.C. wearing the same clothes that we see during her trip. As she arrives at the Hoover building for her meeting with OPR, Skinner is waiting for her outside the boardroom. Flustered, she rushes to fix her hair in the reflection of a picture frame and enters the meeting, immediately apologizing for making the committee wait. All of this evidence suggests that she has not had the time to return to her apartment to change clothes or look more professional for such an important meeting. This was the first step in her life being spared.

After the conference, she presumably composes her letter of resignation while still at the FBI so that she is able to hand it to Skinner before leaving for the final time. When she arrives at Mulder’s apartment, she is still wearing the same clothes that she’s had on for over 36 hours. Sexy. Had she had the time to go home, she would have changed out of her dirty clothes and into something that didn’t smell like sweat and corn and emotional confusion.

All the while, the Syndicate has been buying its time by carefully monitoring Mulder and Scully. They reviewed the tapes from Bethesda Naval Hospital and they chased them from the project in Texas (but let them escape). They were also watching Mulder when he talked with Kurtzweil. Since their plan was to kill Scully, a reasonably high profile player in the game-of-FBI-life, they would have used certain tried and tested processes.

As the Well Manicured Man stated, there are two methods his associates would use, and since Scully has been gone for days, they could easily sneak into her apartment and lay in wait for her to arrive home. They would then shoot her with an unregistered weapon which would be left at the scene (we saw this happen before to Melissa). This is what the Syndicate had planned. Of course, this is not how it played out in Fight the Future, much to our pleasure.

We all know what happened in the hallway of Mulder’s apartment building (feel free to watch it one or five hundred times for a reference though...for science.) It was dramatic, touching, unexpected, and completely ruined the hopes and dreams of many a fan back in 1998. All that unresolved sexual tension was finally going to be resolved. Until that little bee stepped in and changed everything. People yelled at the screen in movie theaters *cough* Jessa *cough*, and every time we watch it, there is still that little bit of hope that maybe, just maybe this time it will be different. It never is. 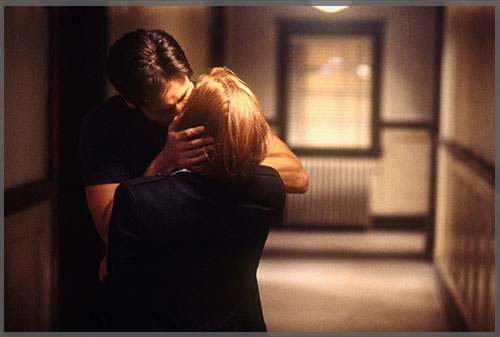 When Fight the Future premiered, Chris Carter & Co. drove around to movie theaters specifically to watch fans react to the hallway scene. He did this because a) he is sadistic and b) he is absolutely brilliant.

Had the bee not stung Scully in that hallway then yes, Mulder and Scully would have kissed. And if you believe the deleted hallway scene, it probably would have been more than that. Hopefully ending up in the shower for both their sakes. Eventually though, Scully would have had to go home. Laden with oxytocin, she would then have taken a cab from Arlington to Georgetown, arrived at her building, walked upstairs, taken out her keys, gone inside, and been shot dead. The Syndicate wanted to stop Mulder and the best way to do that would be to kill the woman he loves.

So when that bee stings Scully, sure the little shit ruins the moment, but he also presents the Syndicate with a better opportunity. Mulder’s phone would have been tapped, so when the frantic agent made that 911 call, the consortium’s goons were able to arrive at his apartment first and take Scully to Antarctica where she would have become part of the larger project. This completely eliminated the plan to kill Scully.

Thus Chris Carter created a bit of a paradox for fans. He ruined one of the most important moments in Mulder and Scully’s relationship with a bee sting. However, at the same time, we owe everything to that bee because without it, Dana Scully would not be here today. Then where would we be? Nowhere.

And that is how that stupid little bee is actually the unsung hero of The X-Files: Fight the Future.