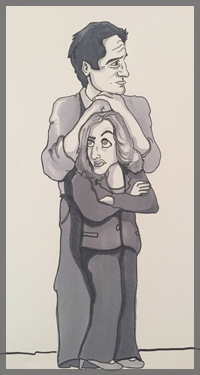 This week's chosen artist is April Piccarreta from Arizona. April works with painting and crochet, but her primary medium is drawing. You can find April and view her work on her website and through her Tumblr, Facebook, Instagram and Twitter.

Here's a little about April:

A little over a year ago, I was working my way through all of the special features on the show Breaking Bad. I quickly noticed that Vince Gilligan was telling more stories about this show, The X-Files, than he was for Breaking Bad, so I figured I might as well see what the fuss was about.  I started watching on Netflix, (I binged all 9 seasons) my first drawing I did was in the second episode and I've been absolutely obsessed ever since.

The first episode I remember watching was 731 when it aired live back in 1995. I remember watching how calm and bored Mulder seemed while talking to Scully on the phone, staring down a bomb, a mere seconds away from being blown to bits and thinking "What kind of show IS this?"

I'm looking forward to Mulder and Scully finally being back home with the FBI doing what they do best, fighting enemies side by side. If a few familiar faces make their way back (ahem immortal Gunmen, ahem) then that's even better!  Honestly I'm genuinely looking forward to it all.

Mulder and Scully were my inspiration. They are such dynamic characters with such a deep connection and I felt there was so much more going on away from the camera. I was inspired to create what that might look like. It was also selfishly my way of coping from episodes that were particularly rough on our heroes.

In no particular order:  War of the Coprophages, Bad Blood, Paper Hearts, Redux II, and The Pine Bluff Variant.

"I would never lie. I willfully participated in a campaign of misinformation."

The X-Files has impacted my life in SO many wonderful ways but the most impactful way has been the AMAZING people I have met because of our shared love for this show!  X-Philes are an incredibly talented, passionate and creative group.