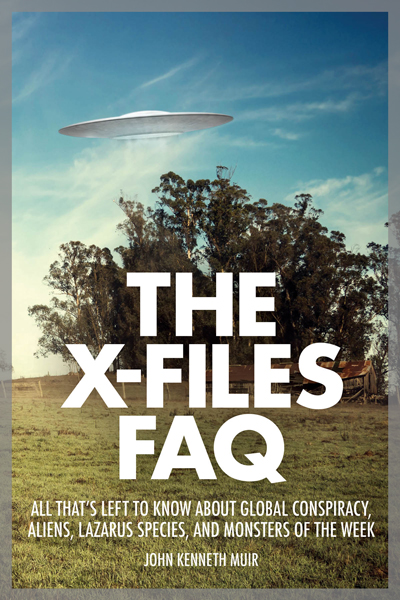 Recently we brought you the review for The X-Files FAQ, and this week we sat down with the author, John Kenneth Muir, for a couple FAQs of our own.

Hit the jump to read our write up or listen to the uncut conversation.

Don't forget to enter our contest to win a copy of John's book, The X-Files FAQ.

We started, of course, with the question everyone must be asked with January 24th, 2016 soon upon us: â€œWhat are your feelings about the revival and are you excited?â€ John said he was a big fan and that of course heâ€™s very excited. For him, The X-Files is one of those franchises, like Star Trek, that he never ever wants to be off the air. â€œThere should be a movie every two years.â€ We couldnâ€™t agree with him more.

â€œDid Chris Carter have any input into the book?â€ we wanted to know. John had asked the creator of the show to write the foreword and he was very pleased when he accepted, considering how busy Carter is with the revival. Chris wrote the foreword for another of his books also in the FAQ series, a horror film FAQ, so Carter was really the person John wanted for this book. At the time, the writer/director was shooting the second episode of the revival, and was super busy, but according to Muir, he was lovely and agreed to do it. The foreword is a great tribute and a big thank you to the people who worked on the series and we are sure fans will love it.

John hopes that the book finds itself a place throughout all the groups of the fandom, young and old Philes alike. He teaches community college as well as writing, and always talks about The X-Files in class. He says heâ€™s always surprised that everybody he talks to knows of the series, because of Netflix and binge watching, and he hopes that new generations of Philes will be just as interested in the book as the old.

As a writer, John is big into context; for him, you canâ€™t understand a work of art fully until you understand the culture at the time around it. He has done a great job with this book, looking into that context, including how The X-Files became popular at the time in part because America had vanquished its big foe, the Soviet Union. As a culture, we had to look inside ourselves for the next big scary monster. â€œChris Carter did a wonderful job of harnessing that need to look beneath the surface.â€ Weâ€™d like to say that John himself has done a great job doing the same with this book, looking beneath the surface and applying context to episodes that might otherwise be shuffled to the side as a simple â€˜Monster of the Weekâ€™.

We switched gears then and asked John about his favorite episode. Between laughs he said that was like asking him to pick a favorite child, so we relented, and let him pick a few. John loves "The Host", and how it looks at the underside of waste management. â€œWhat a weird thing to have a story focus on, but itâ€™s so great! What happens after you flush the toilet? I love it!â€ Again, it relates back to The X-Files knack for looking beneath the surface. He thinks "Home" is an amazing episode. The Peacocks scare the heck out of him. Honestly, weâ€™d be worried if they didnâ€™t. â€œTerrifying villainsâ€, he says. And finally he loves "Detour", and how it makes fun of the workplace team dynamics. You get to see Mulder and Scully and their team dynamics. â€œGosh, thereâ€™s just so many I love,â€ he adds.

So we let him off the hook and segway to Johnâ€™s opinions on The X-Files: I Want To Believe. For me, this is one of the most interesting and well thought out parts of the book. John is clearly a fan of the movie and we wanted his thoughts on why it suffered both at the box office and within some portions of the fandom. â€œI think it was misunderstood, mishandled in a way... the studio put it out in the summer of The Incredible Hulk, The Dark Knight, these huge superhero movies. [IWTB] is this intimate, finely-crafted, really technically precise and well-made little thriller, and itâ€™s so good in those terms.â€ To John, it was a callback to The X-Files of the first three seasons, with the strange and unusual serial killers coupled with psychic phenomenon. A callback to "Beyond The Sea". He loved how it moved the Scully and Mulder relationship forward, and it was about an issue that encompassed the entire run of The X-Files: â€œWho is the protector of the truth? And can somebody who we think of as distained and terrible, can they know the truth? Can they find redemption?â€ He considered that the film was beautiful but a very challenging movie and released in a summer against a bunch of not so thought-provoking movies. â€œPeople were like, â€˜Huh?â€™â€

We had to take a moment to mention Johnâ€™s breakdown of the opening credits of The X-Files. Itâ€™s just a short section in the book, but it opened my eyes to something Iâ€™d never even thought about, instead preferring to use the credits to gather snacks and get comfortable. â€œThe images are trying to tell us something,â€ he says. â€œTheyâ€™re sort of prepping us for whatâ€™s to come.â€ John says he loves how great The X-Files is visually, the visual symbolism including the credits, and that thatâ€™s what makes the show so special and why he loves Chris Carter.

Finally, we asked him if he was a Mulder or a Scully, and why. Between laughs he explains that he believes he is a Mulder and his wife is Scully. He wants to believe, desperately. He can go off on a quest to find something, go whole hog into it, just the way Mulder can. And while he jokes that he might be flattering himself, he wishes he had Mulderâ€™s looks and sense of humor. In human nature, he says, we each probably have a part of both. â€œThe show gives us those two lenses. We put on the glasses of Mulder and Scully and we can view the world and see it in either way. The characters really call to something wonderful in humanity: that desire to believe.â€ We laughed about Mulder believing in anything but religion, and Scully, having faith in nothing but her religion, and how that juxtaposition is part of why we love them both.

Our thanks to John Muir for taking the time to talk with us and to Wes Seeley from Hal Leonard Performing Arts Publishing Group. You can hit up John'sÂ website, purchase his book at AmazonÂ or Barnes & Noble, and donâ€™t forget to enter to win a copy of The X-Files FAQ here.