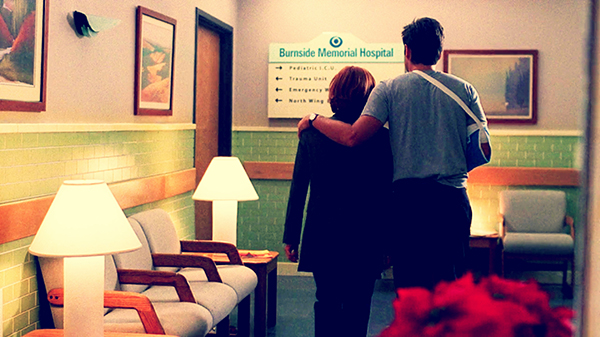 So before the clock strikes midnight at XFN headquarters, let's take a look back at one of the best years the fandom has ever seen. Click on the dates to read more about each event.

January 15th - FOX Broadcasting announces that they are in talks with Chris Carter, David Duchovny, and Gillian Anderson to bring back The X-Files for a short TV run.

March 24th - It's Official! The X-Files will return to television. Mulder and Scully are coming home!

April 24th - Chris Carter hints that The X-Files will likely return in early 2016.

May 12th - David and Gillian rock out on stage in New York City to celebrate the release of Hell or Highwater.

May 29th - It becomes official that William B. Davis will return as the Cigarette Smoking Man!

June 26th - Entertainment Weekly brings us the first look from the set of The X-Files.

July 7th - The first new footage of Mulder and Scully is released!

July 10th - XFN sits down with Frank Spotnitz to talk about his amazing new show The Man in the High Castle.

August 6th - The first full scene from the new series is screened at the TCAs.

August 7th - Mama Scully is coming back! Sheila Larken is confirmed as returning to The X-Files.

September 10th - FOX announces that "My Struggle" will have its U.S. premiere at New York Comic Con in October.

October 10th - "My Struggle" screens to a room of thousands of X-Files fans at New York Comic Con.

October 13th - The Chris Carter birthday project comes to fruition with contributions from fans around the world.

December 11th - "My Struggle" screens in Italy at Courmayeur Noir In Festival.

December 25th - The X-Files: Re-Opened special hits the internet, and the fandom has trouble breathing.

December 31st - The world didn't end. Yet. We make no promises for January 24th.

2015 was an incredible year! So much has happened in the last twelve months, that it's hard to believe that there is still even more awesome to come. It kind of felt like 2015 was the year of the Phile, so we can't wait to see what 2016 is like!

Happy New Year, Philes! The best is yet to come.