There was a problem rendering your image gallery. Please make sure that the folder you are using in the Simple Image Gallery Pro plugin tags exists and contains valid image files. The plugin could not locate the folder: images/Science_Center 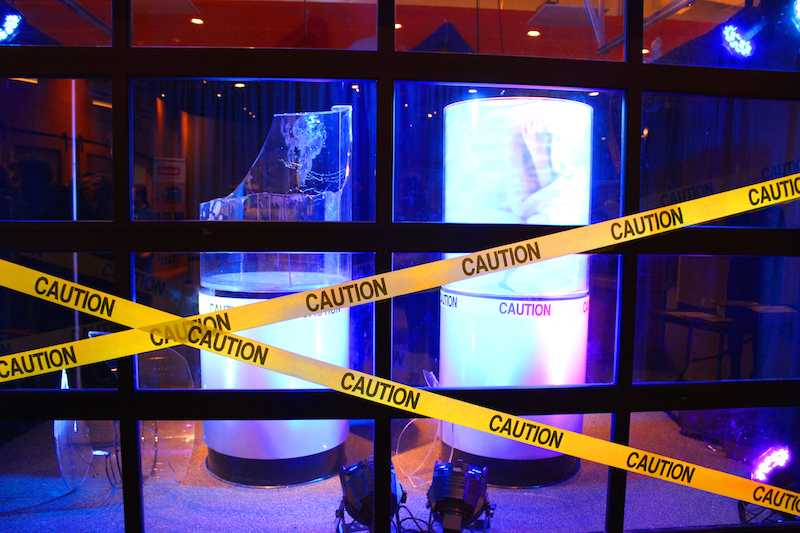 On February 5th, the Saint Louis Science Center hosted an evening dedicated to The X-Files. A part of their First Friday series,The Truth Is Out There was a six-hour event packed with lots of spooky happenings. With events ranging from an educational alien autopsy to photos in Mulder’s office, a Phile couldn’t help but quietly squeal seeing science so beautifully blending with The X-Files. What more could a girl (or guy) ask for? Hit the jump below for a recap of the evening and an in-depth run-down of Dr. Dan Yezbick’s symposium.

As one entered the foyer of the Science Center, fans could wait in line for free tickets to two events dedicated to The X-Files; a special presentation given by Dr. Dan Yezbick about the influence of the series and a screening of the 1998 film Fight the Future. Flyers were then handed out which not only outlined the events for the night but also sent attendees on an Alien Quest scavenger hunt game to solve a case involving the paranormal. 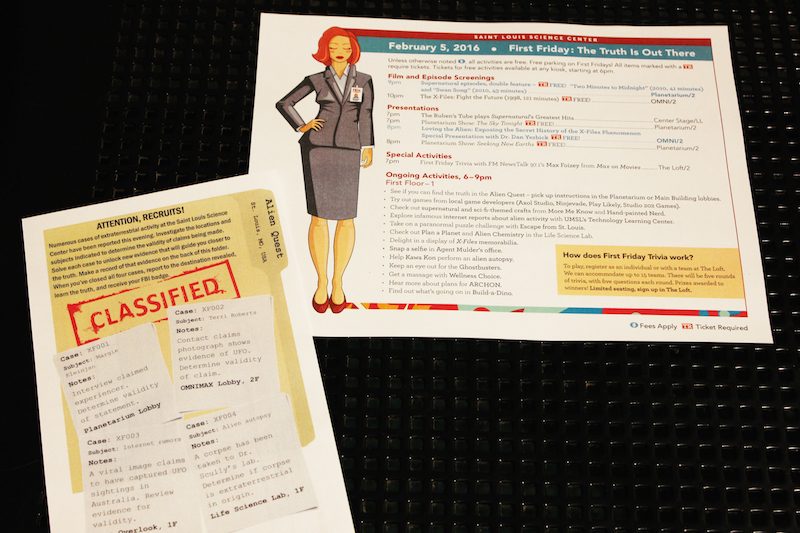 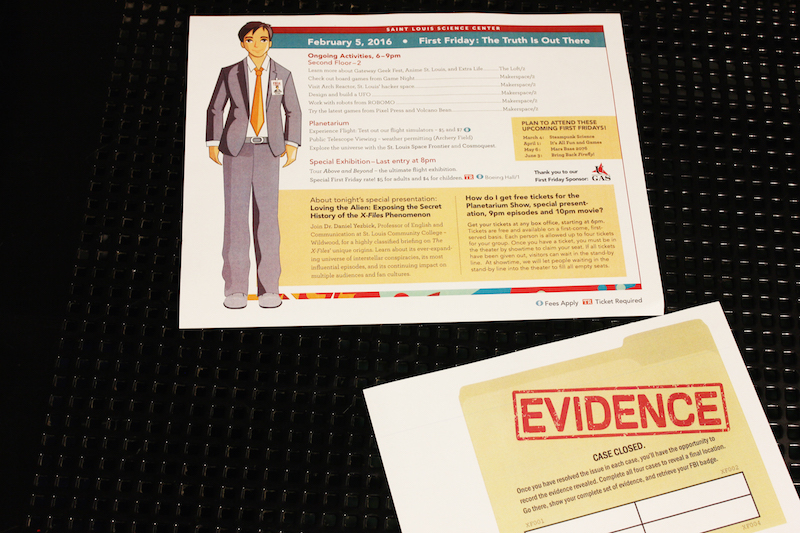 Kawa Kon, decked out in full Agent Scully attire, performed an educational autopsy. On the same floor, X-Files memorabilia was presented along a hallway that ended in Mulder’s office. The memorabilia included trading cards, magazines, photos, and artwork. The remainder of the center was open as well, so after exploring the X-Files showcases, one could wander around the entire building and soak up the science!

One of the highlights of the evening was the presentation "Loving the Alien: Exposing the Secret History of The X-Files Phenomenon". Dr. Daniel Yezbick is an English and communications professor from the St. Louis area. He began his discussion covering the time-span of the cult classic that is The X-Files; With nine seasons, two feature films, one event series, computer games, video games, comics, trading cards, and soundtracks, the show has been involved in our pop culture for an extended time. He goes on to explain that it is one of the most technically well-crafted television series of all time. He makes the point that without The X-Files, many of the shows that followed it likely would never have existed.

Dr. Yezbick details how his presentation will flow, stating the importance of The X-Files in context, a dissection of The X-Files’ structure, Chris Carter as a “conspiracy creator,” and some of his favorite episodes throughout the series. He began by briefly discussing all of the precursors to our beloved series; shows like The Twilight Zone, The Avengers, Dragnet, Kolchak: The Night Stalker, and Doctor Who all played an important part in inspiring the series. He then pointed out all of the shows that spawned because of The X-Files, citing series like Lost, Fringe, and Supernatural. 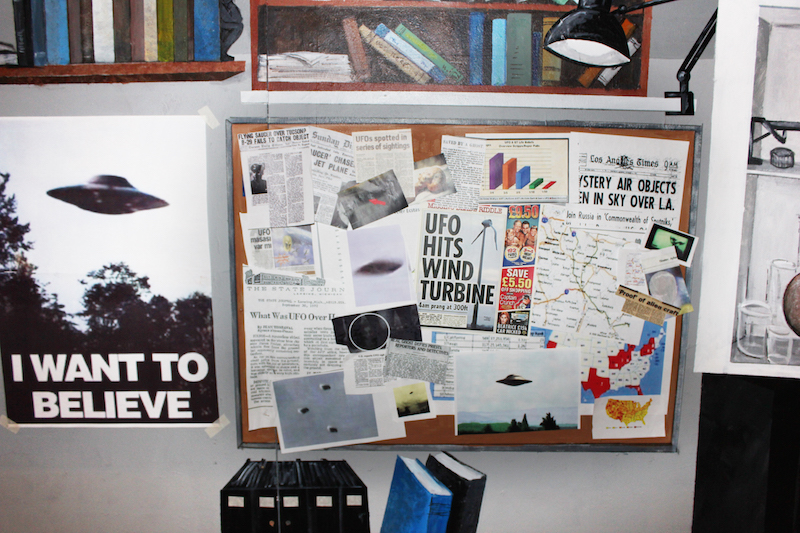 We then move on to the analysis of The X-Files in context with a quote from David Lavery:

“The X-Files, which began as a cult program on the television graveyard of Friday night, was able to build its audience year to year, eventually ranking as a Nielson Top 20 Show with as many as 16 million views that “owned” (pre-Soprano) Sunday evenings in the US.” Lavery is shortly quoted again stating “Carter built a ‘narratologically unique’ series. In the closure obsessed medium of television, nearly every episode lacked closure. Whatever ‘out there’ truth Mulder and Scully discovered in the hour—whatever evidence they accumulated, by means of his intuition or her careful science… dissipated or evaporated before the closing credits.” And I agree completely; some of the things that made The X-Files so creepy were the unresolved cases, the fact that some of the bad guys were still out there, ready to attack yet again.

Dr. Yezbick switched to speaking about Chris Carter himself, and started with a quote from 1994:

Mulder and Scully came right out of my head. A dichotomy. They are the equal parts of my desire to believe in something and my inability to believe in something. My skepticism and my faith. And the writing of the characters came very easily to me. I want, like a lot of people do, to have the experience of witnessing a paranormal phenomenon. At the same time I want not to accept it, but to question it. I think those characters and those voices came out of that duality.

Another common, yet still interesting topic that was discussed was the “dissection” of the show and the differences between the Mytharc episodes versus the Monster of the Week. Dr. Yezbick explained that even though the Monster of the Week episodes tended to be the fan favorites, it was because of the Mytharc—the backbone of the series—that we saw future series like Lost, Fringe, The Returned, and The Leftovers. Chris Carter is, by nature, a nonconformist, anti-establishmentarian, countercultural producer and because of his love for scary stories, mysteries, and political thrillers, The X-Files was able to become the success it was.

And then, of course, we get to the heart of the matter; according to Dr. Yezbick, it’s a combination of Mulder, Scully, and aliens.  Aliens were important to the show not only because of the subject matter but also because of how Mulder and Scully differed with their beliefs in the existence of extraterrestrial beings. Dana Scully became a huge force to be reckoned with, not only in terms of her boldness and intelligence but also because she was atypical in her beliefs as a woman (or so it was viewed at the time). We can all thank Scully for it no longer “being weird” if a young woman is a natural skeptic, or if a woman wants to pursue a degree in a STEM field. She was also groundbreaking in her role as “a badass”, and that, although in the beginning of the series she was sometimes the damsel in distress, she really became one of the toughest characters in the show. 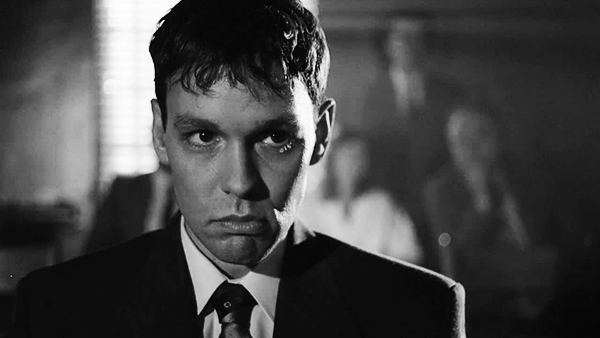 Dr. Yezbick begins to conclude his presentation with some of his favorite episodes (some I totally agreed with, and some I just sort of “whatever floats your boat, buddy). But I think we all have our own biases no matter what. To start, and no surprise here, Dr. Yezbick brings up “Squeeze” and “Tooms” and let’s be honest, who can blame him? Tooms will always be one of my favorite monsters because he could attack you even in the safety of your own home or office. Nowhere was truly safe. Other episodes that were mentioned include “Arcadia”, “Die Hand Die Verletzt”, “The Ghosts Who Stole Christmas”, “Home” (I mean, come on, who DOESN’T mention “Home”), “Triangle”, and his all-time favorite, “Post-Modern Prometheus.” He mentions that the latter episode had “wicked fun screenplay and videography” and “the single best finale of any TV episode ever!” 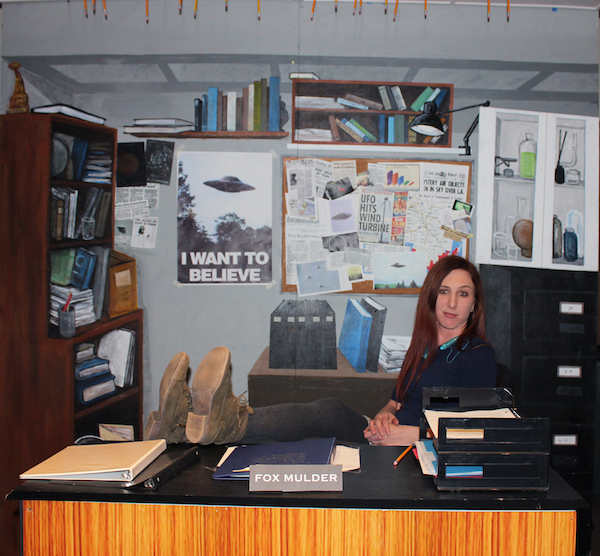 In the end, Dr. Daniel Yezbick summarizes with the primary themes and conflicts in the series. First is a cautionary emphasis on vigilance, scrutiny, and flexibility in the face of the unknown, the different, and the uncanny. Second, the general anxieties surrounding safety and sanctity of healthy bodies in a toxic, postmodern environment and societies distrust of medical and pharmaceutical systems of knowledge and control, along with the volatile nature of corporate capitalism, and the general human preoccupation that we are not alone in the universe. All in all, there are a plethora of themes that surround the main concepts of wanting to believe and to trust no one.

And with that, Dr. Daniel Yezbick closed on a hopeful note, mentioning his excitement for the revival and how wonderful it is to see our two groundbreaking leads back on the silver screen again. His presentation was honest, thoughtful, and full of giddy excitement. And to be in a room full of other fans just as excited as I was—that’s what made the entire experience.

And just one hour after his presentation, the screening of Fight the Future began on the giant OMNIMAX theater screen. It was like 1998 all over again!