XFN Exclusive: Spotnitz and Rotter on The X-Files Annual 2014 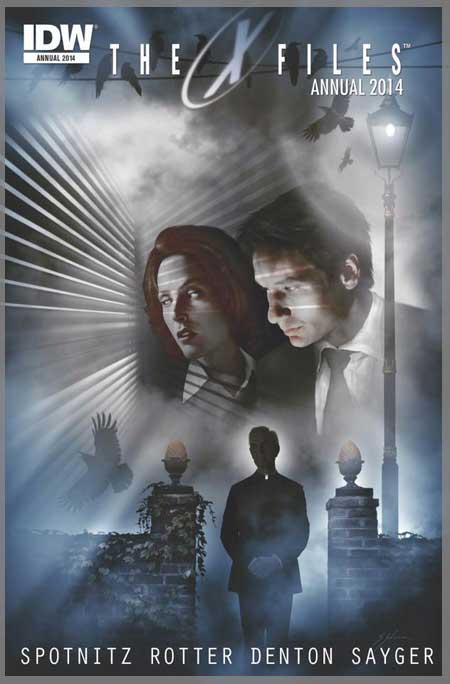 Weâ€™re sure that youâ€™ve been diligently following all the new X-Files comic book releases that 2013 and 2014 brought us, The X-Files: Season 10 and the most recent The X-Files: Conspiracy crossover have been out and about for the enjoyment of everyone and giving us a lot to talk about.

But what is almost unknown is that there is one more treat coming to us this spring, one that had been stashed away for quite a while. Enter The X-Files Annual 2014.

The rumors about this project have been rounding the web for little more than a month since it was announced on The Nerdy ShowThe Nerdy Show, but to give you a bit of background on this â€œnewâ€ release, we spoke with Frank Spotnitz and Gabe Rotter, both very well known in the X-Files community and two of the writers of the upcoming release.

According to Spotnitz, this project had been on hold for a while, since 2009, and it gave him the novel opportunity to work with Rotter in a different capacity: â€œGabe has been with Ten Thirteen Productions since forever and heâ€™s a really good writer and a really good novelist in his own right,â€ said Spotnitz about his fellow writer, and the prospect of writing a comic with Frank Spotnitz was a delight to Rotter as well, who has been a huge comic book fan his whole life.

â€œWhen Wildstrom was doing the comics, Gabe had this idea that I thought was a great one,â€ and while they both developed the idea, Rotter was the most involved in the actual scriptwriting task of the comic. â€œReally it was his work that I helped him with,â€ claims Spotnitz, candidly. â€œBut then the Wildstrom comics ended before we even got a chance to publish it.â€

But then Shannon Denton, former editor of the X-Files comics at Wildstrom, approached them and encouraged them to pitch the idea to IDW in the midst of the success of The X-Files: Season 10. The publishers loved it.

So what can we expect from the Annual?

â€œYou can expect a creepy X-Files â€˜Monster of the Weekâ€™ type story that probably wouldnâ€™t have been told as a TV episode,â€ explains Gabe. â€œIt doesnâ€™t fit the Season 10 mythology storyline, which is why IDW decided to do it as an Annual. Itâ€™s set in a different time and place.â€

According to IDW April solicitations, The X-Files Annual 2014 will include two stories; the lead one, penned by Spotnitz and Rotter and sharing credits with Shannon Denton, involves â€œan untold tale from Mulder and Scullyâ€™s first stint with the FBI. When a man returns from the dead with a warning for his wife, the agents investigate and cross paths with a very peculiar priest.â€

While both Rotter and Spotnitz are experienced professionals, writing for comic books was relatively new for them at the time the original script was created, but more Rotterâ€™s case than Spotnitz, who had been involved in the original Wildstrom editions.

â€œIt actually was a challenge, a fun one, but a challenge nonetheless. I found that it was akin to directing, because you really had to visualize how each frame would look when telling your story, which you donâ€™t have to so rigorously record when writing a novel or a screenplay,â€ Gabe explains about his experience tackling the creation of the annual.

â€œYou envision what your scenes will look like in those formats,â€ Rotter clarifies about the comparison with working for TV or Film screenwriting, â€œBut you donâ€™t have to necessarily write, for example:

â€˜PAGE THREE, PANEL ONE. A REVERSE ANGLE OF THE PREVIOUS PANEL, TWO SHOT OF MULDER AND SCULLY WALKING DOWN THE WOODEN STAIRS INTO THE GLOOMY SHADOWS.â€™

So there was a learning curve but I enjoyed the heck out of it.â€

â€œYou have to get used to the format as it is different than in moving image, you still get shots, but theyâ€™re still shots, but they have to suggest movement so itâ€™s a different mindset,â€ Frank elaborates about his own process. â€œThis is the kind of stuff that I realized while doing the Wildstrom comics.â€

The last annuals released for The X-Files belonged to the editions created by Topps comics, more than a decade ago. Those were extremely successful and the copies, while they can still be found in sites such as Ebay, are very rare.

Both writers enjoyed this creating experience greatly, â€œIâ€™m excited for Gabe, more than anything else, that this will finally see the light of day,â€ says Spotnitz. Rotter is equally excited to have shared this experience: â€œIt was fun working with Frank in this capacity. As anyone who knows him will vociferously attest, Frank is the best. Exceedingly kind, crazy smart, and always supportive.â€

As for new works coming up, this is what Gabe had to say: â€œI donâ€™t have any plans to write further issues of the comic, though I wouldnâ€™t be opposed to taking another crack at it. I enjoyed it quite a lot. As I said, we wrote this about four years ago so we didnâ€™t work with Joe Harris. But Joe is super cool and incredibly bright and creative and we love what heâ€™s doing with The X-Files: Season 10.â€

As for Frankâ€™s future plans to write additional X-Files comicsâ€¦ the truth is out there.

As always, my advice is to pre-order the The X-Files Annual 2014 from your local comic book store right now to ensure a copy of the regular issue and the variant, and expect more news from this and all additional comic news very soon!