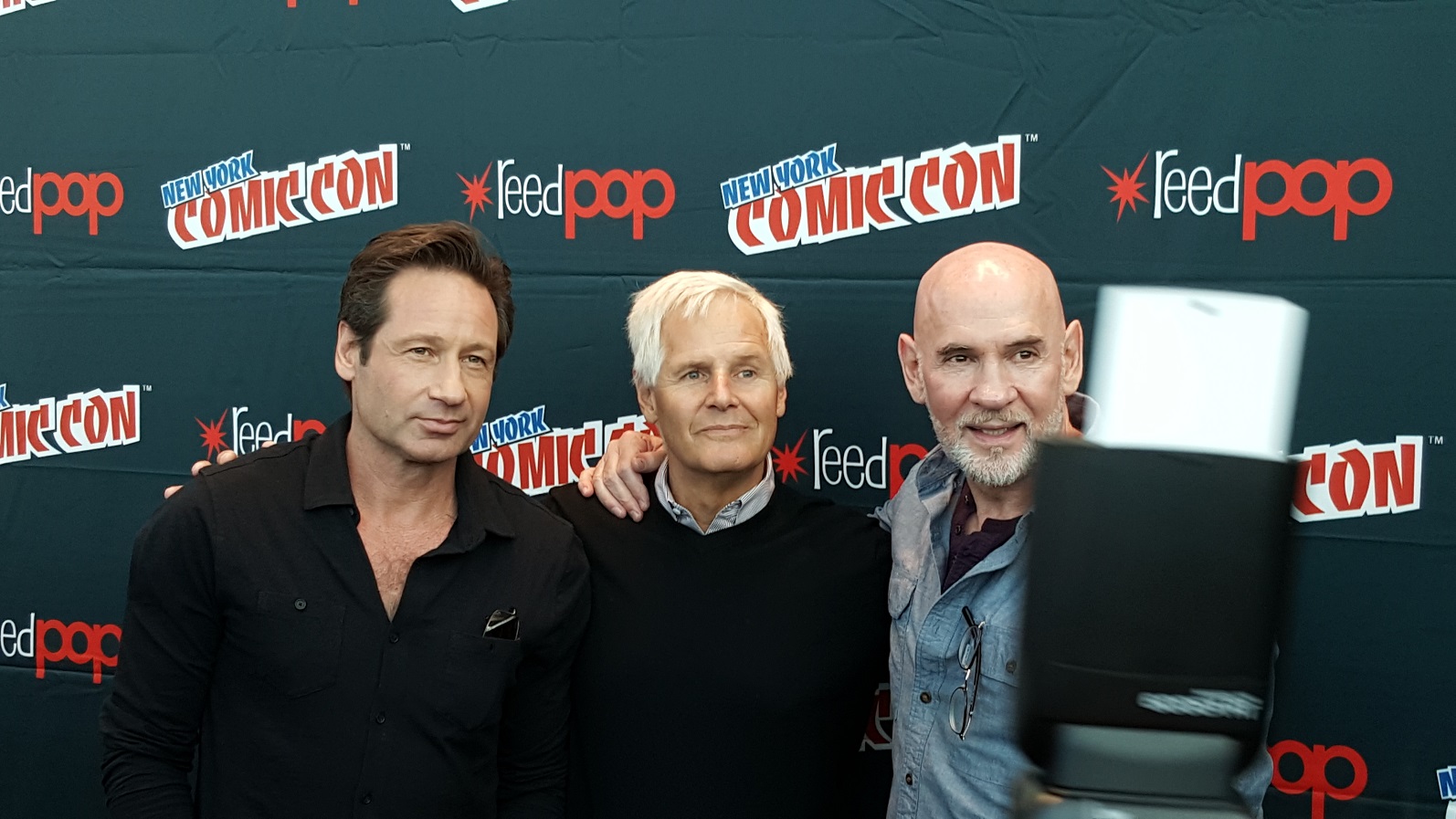 Things we learned from The X-Files press round table interviews at NYCC…warning, there be spoilers ahead!

+ - click for spoiler Click to collapse
Mulder's wife to several outlets including XFN. "How bad is it if your wife diagnoses you as depressive? That's not fair, she's not a psychologist. I don't know how she got away with diagnosing me." Chris Carter later stated at the EW Fest that he was surprised by David's answers, that Mulder and Scully were "together but never married," and that David's comments were news to him. The truth is still out there on whether or not Chris Carter meant never married pre-2008 or never married after. 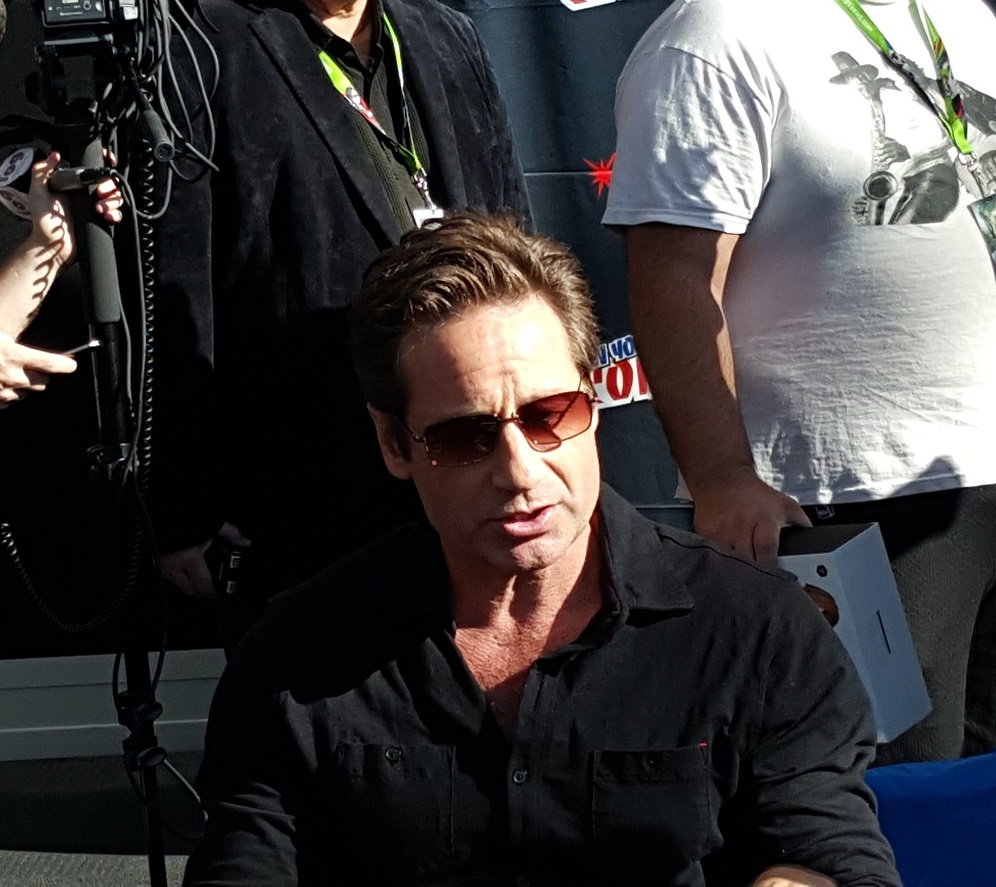 For David Duchovny, this season's theme is the "re-animation of someone who is passionate." When we last saw Mulder in IWTB, that passion was beginning to reignite but a lot has happened with Mulder and Scully since 2008 and they are certainly not in the same place emotionally that we last saw them in IWTB.

On the fan reaction, David gave props to the fandom during the NYCC screening of "My Struggle" for enjoying more than just the easy laugh from the fan service moments they recognized. "It’s not just about, oh Mulder says that line...check, Scully says that line...check, pencils on the ceiling...check. That’s not why we did it. We did it to tell stories and they were there, they were with it."

When asked about new generations of X-Files fans, David smiled when answering, "I’ll settle for the old ones, I’m not greedy."

How has The X-Files stood the test of time? David credits that to the opposite yet attracting forces of Mulder and Scully and the fact that the show was a little bit of everything. "It was a horror show, it was a mystery show, it was a science fiction show, it was a relationship drama, it was a comedy. It was everything, and it could somehow bend and be flexible to be all these different kinds of tones." 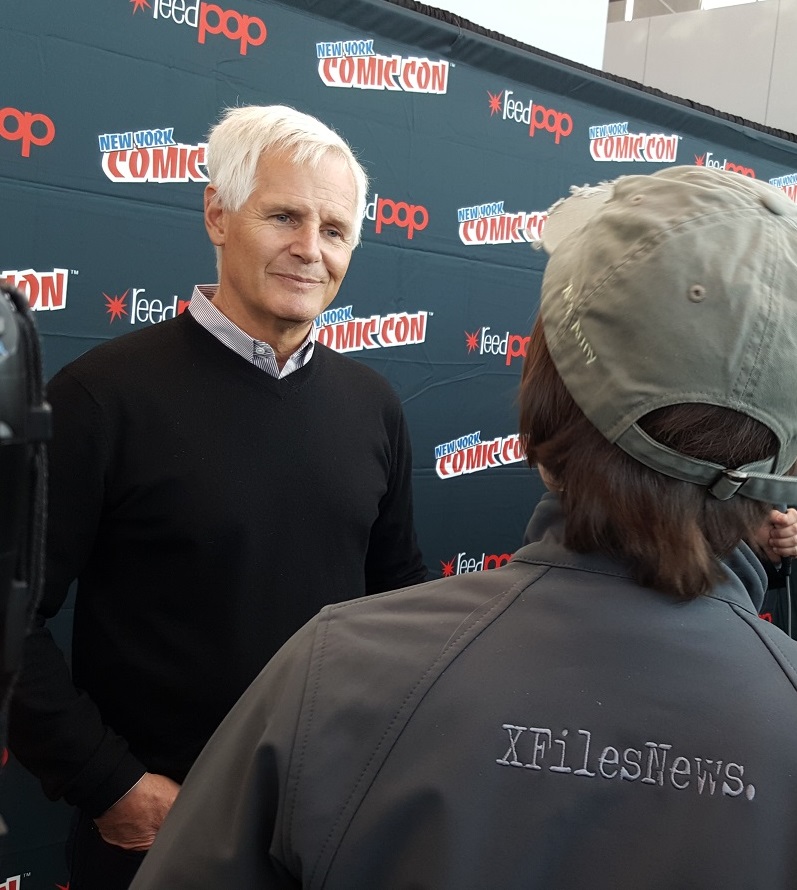 For X-Files creator Chris Carter, the theme of #XFilesRevival is "Reunion." He was happy to put the "band back together" which included Glen Morgan, Darin Morgan, James Wong, and of course David Duchovny and Gillian Anderson. Since the revival was filmed in Vancouver, that also meant working with former X-Files crew.

What did Carter want for this new season of The X-Files? He knew what he didn’t want and that was for season 10 to be a victory lap. His goal was to be original and new. Given what we saw in "My Struggle," mission accomplished.

On the fandom, Chris made it clear that the reason The X-Files came back was due to the fans. "That’s the reason we’re back. Even though we try to make it accessible to new viewers, the reason we are back simply, is for the hardcore fans." Chris did not discount younger fans however when discussing a 17-year-old who asked a question during The X-Files panel earlier in the day. "He was born 5 years before the show went off the air. That’s really a feature of the time we live in when you can watch the episodes streaming on Netflix. That you can actually go on and watch classic episodes of television, not just The X-Files, but watch them at will, that’s an amazing day."

When the discussion turned to the second X-Files feature film, IWTB, Chris had this to say about their story decision: "We did a little movie in 2008, that’s what Fox asked us to do, so I look at it as a lesson learned that if you’re gonna do an X-Files movie, you gotta do a big movie, not a little one."

Fans will remember that The X-Files went off the air in 2002, in large part due to a shift in attitude towards the U.S. federal government after the September 11th terrorist attacks. Given the time we live in now, Chris found it rather easy to find the pulse point of government distrust again. "We live in a time where the government is suspect now, so that plays into what we’re doing and it makes these episodes and the show, it revitalizes the show again."

On the genre, Chris stated that he believed he had taken a genre that had grown cold on television and super heated it. "I was inspired by All the President’s Men when I was a kid and I was inspired by Watergate. I think that I took something and made something of it in the science fiction genre and it is what it is. All we’re trying to do is tell really good X-Files stories." 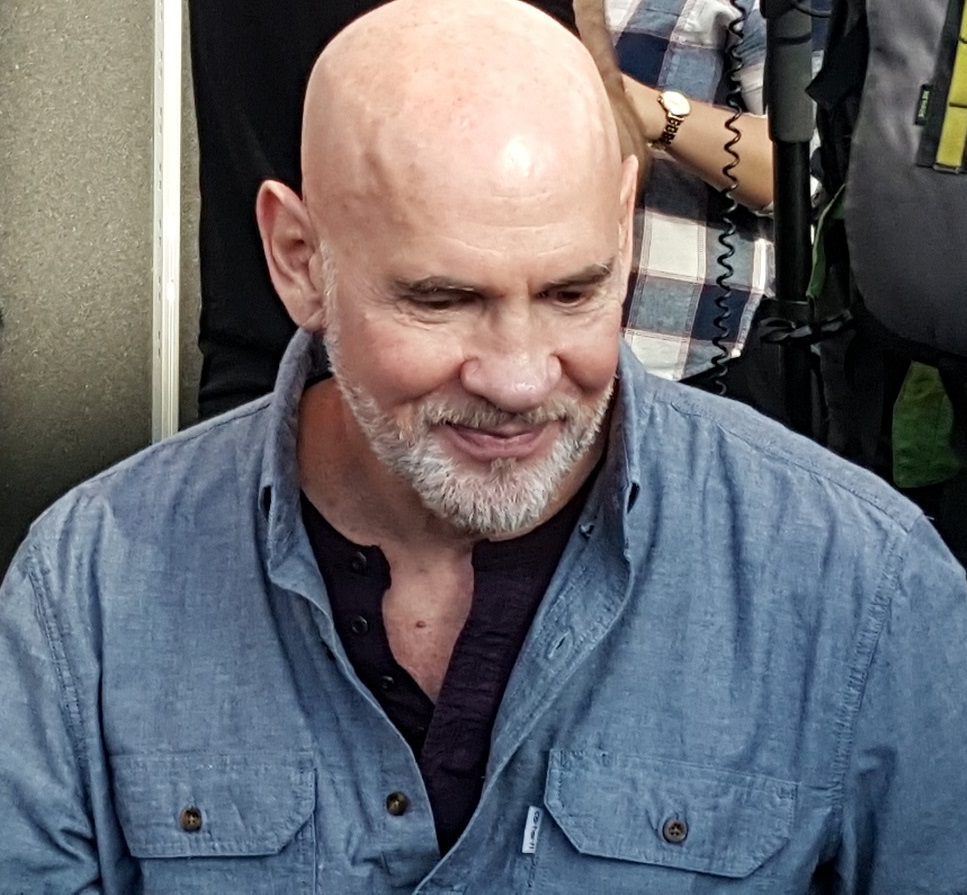 Mitch Pileggi’s proud moment during the screening of "My Struggle" was seeing his name in the main title credits. "To see it with David, Gillian, and then me… it was pretty cool, it made me pretty happy. I was psyched."

When asked why on earth Skinner is still an Assistant Director, Mitch responded that it’s clear Skinner is still at odds with people inside the FBI. "He’s been an Assistant Director for over a quarter of a century so he’s obviously got people who are hindering him from progressing any further within the agency, and a lot of that probably has to do with his relationship with Mulder and Scully."

How does Mitch see Skinner’s relationship with Mulder and Scully? "I think he’s their champion in the FBI, which makes me feel really good to say that, I’m very proud of that."

When the discussion turned to The X-Files fandom, Mitch grew very serious. "We have fans that have been with us for so long and have stuck with us, and even when the show wasn’t on the air, that fandom still maintained, and then to have new generations of fans is so friggin cool. To see these kids, to talk to these kids that are like 13 and 14 years old that know more about the show than I can remember, that’s pretty awesome. It’s so gratifying and so amazing that we’ve been able to sustain this fandom."

On social media, Mitch and I got into a funny discussion on the rapid fire awesome of the internet.
Mitch - "As soon as we walked off the stage (after the panel), Gillian had texted David about his flow because when we were on the panel he was talking about the flow."
Tiffany - "She watched it live."
Mitch - "She watched it?"
Tiffany - "Yeah, they streamed it and she was watching it while you guys were on."
Mitch - "Did she? I didn’t know that, oh man I would have said hi to her!"
Tiffany - "Well, you were kind of busy."
Mitch - "Yeaaahhhhh." 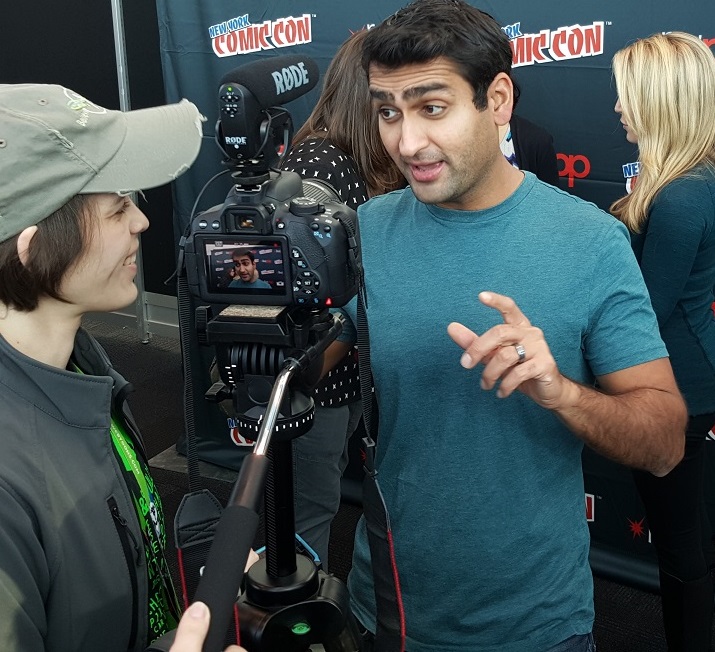 Kumail taught me that I am not the only one who has seen some X-Files episodes over 20 times. In opening the discussion on that subject, Kumail admitted to seeing quite a few episodes upwards of 15-20 times. Seeing an opening, I asked him which ones. His response was priceless. "My favorite episode is called 'Clyde Bruckman’s Final Repose,' and one weekend recently I watched it four times in the same weekend and I kind of like cried each time. Each time I cried more even though I knew what was coming. You guys are gonna think I’m crazy, I’m sort of re-watching it (the series) for the fourth time." Just which episodes has Kumail seen 20+ times? 'Home,' 'Clyde Bruckman’s Final Repose,' 'Ice,' 'Folie A Deaux,' and 'Never Again' to name a few.

When asked what makes The X-Files special, Kumail grew nostalgic. "Why is it special? I think what makes it special is Mulder and Scully and Skinner. I think their relationship is so strong and they work so well together. I think it's got a great mix of one off stories and the big mythology. So someone can just watch an episode and enjoy it but you are also hooked into this big mythology."

Kumail went on to discuss what makes the show relevant today. "...with all the stuff about government snooping and Snowden and all that stuff, you know, all the surveillance stuff which is frankly terrifying but somehow we’re now okay with privacy not being important anymore. I think it’s Facebook’s fault. We got desensitized. Twitter, 4 Square we tell people where we are all the time. It used to be important to not say that, but now we’re okay with it, so I think the show’s really gonna resonate now because that is such a concern right now. The fact that Snowden is considered a bad guy is scary, I think."

On The X-Files and social media, it was Kumail’s belief that the show resonates so well with social media users due in large part to its humble beginnings in 1993 during the emergence of the internet. "...there’s a lot of speculating of where things are going to go, whose motivations are what, so I think that’s really going to work. Let’s face it, big X-Files nerds are sort of nerdy people who are like online, I’m online a lot. So I think the people that like The X-Files are also people who are online a lot."

When asked about the evolution of the word nerd, Kumail smiled. "It used to be an insult and now it’s a compliment. To me I think a nerd is just someone who’s passionate about something so I think you can be a nerd about anything, and I like that. The nerd thing is really defining yourself by optimism, by passion, and I think that’s a really fantastic thing."

That’s it for our coverage of The X-Files round table interviews at NYCC! Now for the two month wait and bets on #ringgate.

Questions? Comments? Hit us up below.