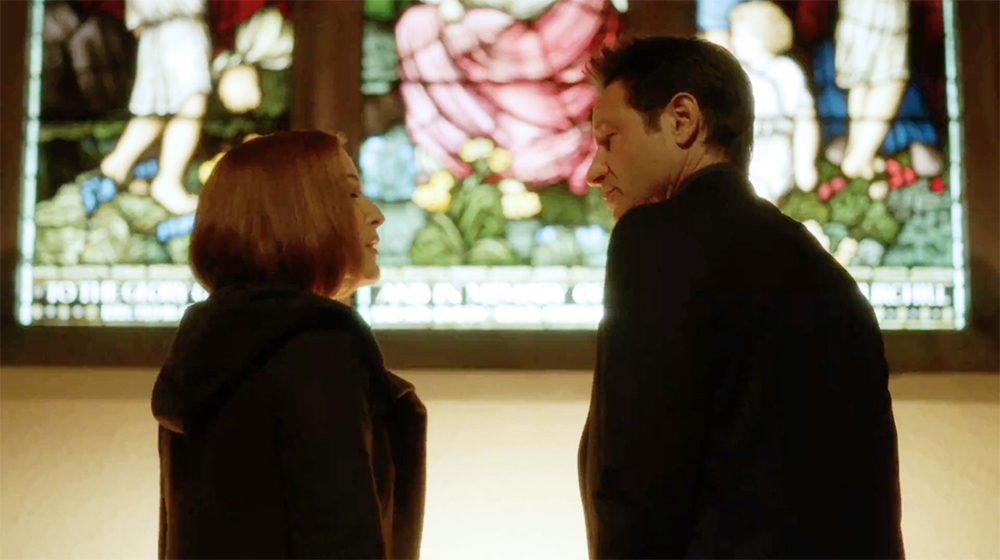 Tonight marks four weeks into the eleventh season of The X-Files, and while we've seen some of what's to come each week, we've yet to get a glimpse of what the second half of the season holds. That changes today with FOX's mid-season trailer. There's a lot happening in the trailer below, so let's discuss some of the final episodes. You'll also find about 150 screen caps at the bottom of the article if you care to investigate.

When a pair of teenage girls attack one another, each believing the other to be a monster, Mulder and Scully find that their investigation could possibly lead back to their long-lost son, William. Written and directed by James Wong.

After withholding the plot line since Season 9, this season will finally fully explore the William Issue™. While we've yet to see much of him, he's important in this trailer and will play a key role in upcoming episodes. James Wong wrote "Ghouli," and after his William sequences last season, you know that this episode will be heartbreaking.

The case surrounds an apparent monster attack on a boat—the Chimera. However, the case will only scratch the surface, as the trailer states, "What begins as an ordinary case will lead to the ultimate X-File."

In science, a chimera is an animal with two different genotypes. It appears that here those genotypes are human and alien. Skinner warns Mulder that they need to drop the case, but when has that ever stopped Mulder and Scully before? And what type of monster is the ghouli? How is William involved in all of this? Does he have some ability like the children from "Founder's Mutation"? The questions here are endless.

There are two clips from a cafe scene that look to be part of "Ghouli." In the first, Mulder and Scully research the ghouli online. In the second, Mulder reveals his thoughts on William's conception, and it's a lot more sinister than what he said at the end of "Existence". Because apparently the truth we don't know.

I believe that through the Smoking Man you were an unwitting participant in a eugenics program. I believe our son was one of his test subjects.

Hey, at least we switched from "Scully's baby" to "our son". It also looks like the Scully-William telepathic phone line is still open. "Is this a message for me, or am I sending a message to you?", asks Scully as she stares at a snow globe with a windmill inside. "He wants us to find him, Mulder," insists Scully. Apparently we've moved on from the premiere in which she said  that William would find them.

Why would he call you here just to see him die?

Has William shown Scully how to find him? Will Scully and Mulder finally be reunited with their son? I guess we'll find out on January 31st.

Skinner goes AWOL when his past comes back to haunt him. As Mulder and Scully try to track him down, their growing mistrust of him reaches its apex.

Walter Skinner is finally getting the backstory he deserves this season. Multiple clips from "Kitten" are present in this trailer. When Skinner's past catches up with him, apparently Mulder and Scully meet Haley Joel Osment and his fuzzy friends in the woods.

Father said there's two refuges in life from sorrow: music and cats. But I think cats are creepy.

We'll have to disagree with you there, Haley because XFN collectively owns about 20 cats. After all, you need someone to comfort you after The X-Files these days. (Hint: you'll need one after "Ghouli.")

Flashbacks will be important to "Kitten," and we see some of those Vietnam scenes here. Will Scully and Mulder be able to track down Skinner before it's too late? (Probably.) And is Mulder's current distrust of him warranted? Scully seems to think that he's trustworthy. "Walter Skinner didn't do this. He's a good man," she tells a local law enforcement officer. Though the same officer wants to know what Skinner was doing standing over a dead body in the woods.

Channeling his rebel self, Mulder picks Skinner's lock to look for any clues as to why Skinner has disappeared:

"That get your juices flowing?"

"As much as I appreciate any reference to my juices, Scully, my only concern here is for Skinner."

Poor Walter is all alone out in the woods and his rescuers are too busy flirting to get anything done.

Mulder is close. I suspect he'll be interested in project crossroads. We'll be able to find what we've been looking for.

We already know from the premiere that CSM needs William to finalize his plans. He clearly won't stop until he finds him. Hopefully Mulder and Scully get there first.

One of the upcoming episodes will be quite gory based on the clips of a surgeon licking a piece of bloody flesh. "Sanguinarium" much?

Scully cuts her hair sometime after "Kitten." Which is a little sad given that they finally perfected the longer hair this season.

And then, of course, there's this platonic church scene.

I've always wondered how this was gonna end.

Bonus: Per one religious scholar, the stained glass here is representative of Matthew 19:14

But Jesus said, Suffer little children, and forbid them not, to come unto me: for of such is the kingdom of heaven.

Given William the miracle child and the heavy religious undertones of The X-Files mythology, this stained glass fits quite well.