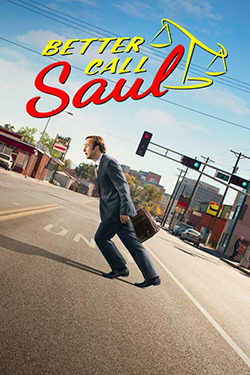 In this week’s episode of Better Call Saul, Jimmy’s “showmanship” threatens to blow up his career and his burgeoning relationship with Kim. Meanwhile, Mike’s efforts to atone for his sins and protect his family might be throwing him into deeper water than he’d like.

Hit the jump for our recap and review of “Amarillo”.

Decked out in white with a cowboy hat to match, Jimmy waits in Amarillo, Texas where he’s paid a bus driver to fake a breakdown. 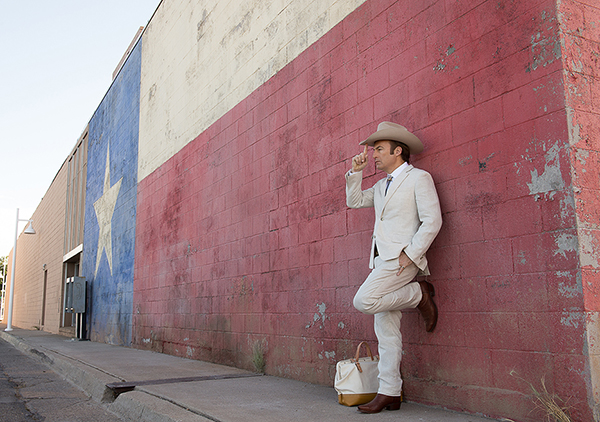 Jimmy enters the bus and we are greeted by a full load of Sandpiper residents on their way to lunch.  Jimmy is looking for Mrs. Urbano; she had responded to one of Davis & Main’s mailers about the class action case but Sandpiper has been blocking his access to her. this is probably the most Saul-like we've seen Jimmy this season and frankly, it's amazing. Odenkirk knows how to lay on the sleaze while still maintaining a veneer of charm and it's glorious to watch.

“Nothing makes me sadder than to see people of the greatest generation, people like my own Nana and Bobo, getting overcharged by some great big company, even if it was an accident,” he tells them.

It’s a somewhat shady move, but he knows this tactic will pique the interest of Mrs. Urbano’s fellow lunchers, and by the time he’s done with his spiel, it’s pretty clear Jimmy has bagged himself a full buffet of potential new clients. 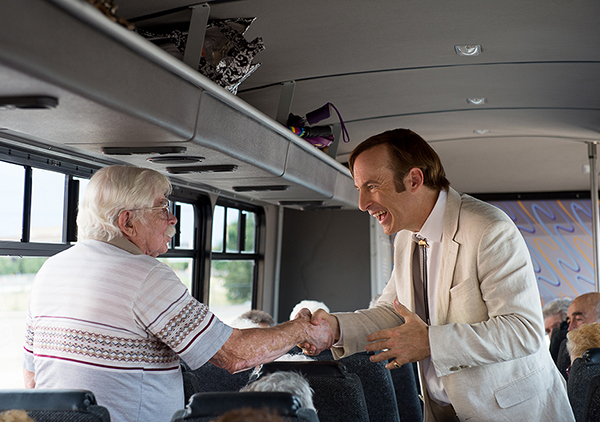 After the credits, we land in a meeting at HMM. Cliff congratulates Jimmy on his success procuring the new clients in Texas and everyone is pleased, except for Chuck, of course, who throws cold water on the celebrations, wanting to know how Jimmy turned one response card into twenty-four. I mean... it's not a terrible question, but Chuck's delivery is anything but innocent. He says the opposing counsel might determine there’s been some solicitation when they see the shift in numbers, and shady as it is on Chuck’s part… he has a point. Solicitation is an offense that could get Jimmy disbarred. That being said, Chuck seems more interested in tearing his brother down than concerned about legal technicalities and I want to reach through my screen and smack him. Can’t he ever just let his brother have a win?

Jimmy, uncomfortable with Chuck’s presence, takes a moment, before recovering to spin a good story. He claims the uptick in business is simply the result of geriatric gossip.

“Is it any surprise they wanna speak with a guy who is there to show them they may have money coming their way?” he asks. “I gotta tell ya, with all that in mind, I shoulda done better.” It's a glorious recovery and I wanna throw him a high five.

Howard, Cliff, and co. are happy with his explanation but Chuck doesn’t seem to be buying it; he’s well equipped to sniff out Slippin’ Jimmy. Cliff throws Chuck a bone, thanking him for his concerns. It seems like everything is smoothed over and Jimmy has dodged a bullet again, however Kim is not so convinced of Jimmy’s innocence either. Jimmy tries to play footsie under the table, but she avoids his attention, provoking him to concede that he will find another way to sign up new clients. Cliff has faith in his abilities and tells him to go forward.

After the meeting in the hallway, Jimmy tries to make nice with Kim, avoiding her questions about how he really signed on the Amarillo clients.

“You know I believe in you," she says. "I made my beliefs known to them, and now everything you do reflects back on me with Howard. I talked him into going out on a limb for you. Do you understand? It’s my word, my judgment.”

Jimmy is taken aback, hurt by her words.

“You and I both know you can do this job. But please, you just have to do it the right way,” she says, trying to smooth things over before walking away. Try as he might, the longer Jimmy plays in the corporate world, the less he fits in. The man needs a hug.

At his daughter in law’s house, Mike plays with his granddaughter, Kaylee. Stacey accepts some money from Mike to help pay the bills, and after some prodding she confides she’s worried about their safety.  She’s been hearing gunshots during the night. She says she called the cops, but by the time they finally arrived, there was nothing to be found. Mike offers to stay the night but she steadfastly refuses. For some reason, I don't trust this chick. But I adore the scenes with Mike and Kaylee and will take any and all I can get.

At Davis and Main, Jimmy suspects Sandpiper is blocking the mailers from ever getting to the residents. Cliff is inclined to agree but doesn’t know what they can do about it. Jimmy has a plan: a television commercial aired during Murder, She Wrote; it's the one constant of the retiree's day. Cliff is open to the idea and tells him they will talk about it next week. After watching a previous terrible attempt at making a commercial by Daivs & Main, Jimmy takes this as his cue to go at it alone and produce his own. 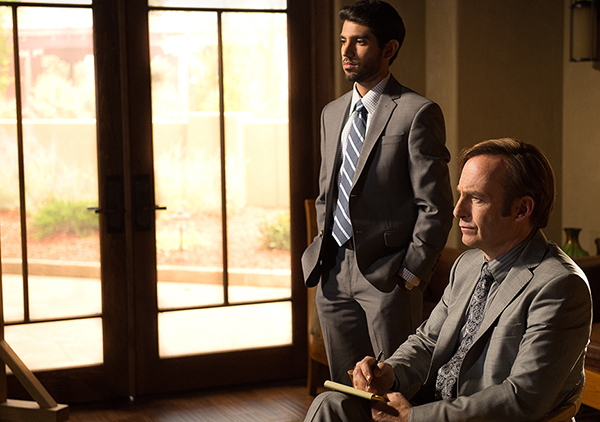 He hires the pair of film students we met last season to help make his vision a reality. “Showmanship” is what this commercial needs. At the house of Mrs. Strauss, the original resident who set the Sandpiper case in motion, Jimmy and his buddies get to work, using Mrs. Strauss to star as the quivering victim of Sandpiper’s scam. Coiffing her hair, she descends the stairs via the stair lift. “I’m ready for my close-up, Mr. McGill.” I'm ready to have this old broad in every episode, I think, chuckling.

Mike being Mike ignores his daughters-in-law’s request and parks his car outside her house for a stakeout, keeping watch while the family sleeps. Dosing, the neighborhood is quiet until he hears a thud, thud, thud. On high alert, he takes his gun out of a glove compartment. As the noises grow closer, the tension rises…  until we finally see the source of the disturbance: a station wagon delivers newspapers. Talk about a buzzkill. Mike heads off to work but as soon as he gets there, he receives a panicked call from Stacey. He speeds back off to her house.

When he arrives at her house, Stacy is frantic. She shows him a small hole on the corner of her house. She claims she heard gunshots again but Mike knows better, having stayed the night. He suggests she dreamt it but Stacey won’t be soothed no matter how gently Mike tries to allay her fears. “We’re getting you and Kaylee out of this house, end of story,” he finally tells her, and I can’t help but wonder whether she’s playing him.

At Jimmy’s generic corporate apartment, Kim and he sit down to watch the fruits of his labor. The commercial is effective, and to Kim’s surprise, professional. If she were an eighty six year old Sandpiper resident, she’d be dialing to make her claim. She wonders out loud if Cliff was okay with it, and Jimmy assures her it’s fine, not wanting to ruffle her feathers with how he went about making the video without prior consent. 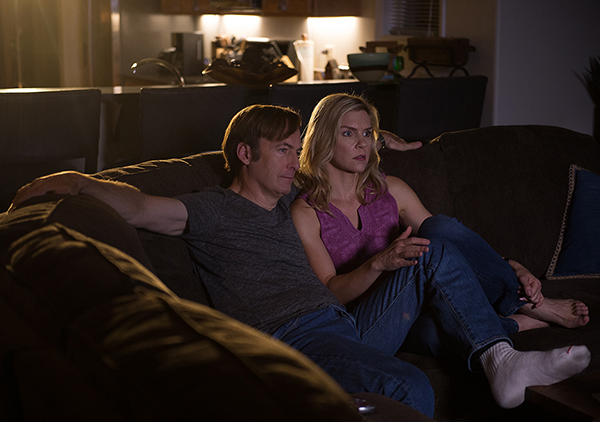 The next morning, Jimmy tries to set things right, but coming upon Cliff playing the guitar, he chickens out and instead takes it upon himself to send out the commercial on his own. He gets the number for the TV station in Colorado Springs and asks for the ad department. This is obviously a terrible idea that will bite him in the ass.

Meanwhile, if Mike is going to move his granddaughter and her mom, he’s going to need more cash. He pays a visit to the shady vet, asking if he knows about any well-paying side jobs. The vet says he knows a loan shark, but Mike’s not inclined to be breaking any legs just yet. He takes a crappy $200 bodyguard job with a sigh.

“You want next level pay, you gotta do next level work,” the vet informs him.

It’s commercial day, and Jimmy nervously awaits the results from its first run. For a few moments, it seems like his plan has failed spectacularly, but the phones soon light up like a Christmas tree and it seems Jimmy has once again dodged a bullet. Surely Cliff will be happy with this turn of events?

Later that night, Mike can’t sleep. His phone rings, and it’s the vet on the line. There’s a new job with “next level pay.” The guy is willing to pay serious money and specifically asked for Mike. This can’t be good news.

Meanwhile, Jimmy and Kim are at his place watching a movie. Cliff calls, and Jimmy is certain it’s to congratulate him on his success.

Cliff is furious. “You ran a commercial?” he yells.

“To be fair, you did tell me client outreach was my department,” Jimmy says, trying to justify his actions, but it only serves to further anger Cliff.

“Howard told me you were a little eccentric,” Cliff says. “He didn’t tell me you were a goddamn arsonist.” He demands a meeting the next morning to view the ad and angrily hangs up on Jimmy.

Jimmy is stunned, and returning to Kim in the living room, pretends he’s still on the line with Cliff. Jimmy lets her think he’s heaping on the praise and when he finally “hangs up” she calls him Cliff’s Golden Boy

“Did anything blow up yet?” he asks, referring to the movie, but I can’t help but think his entire life just did.

In a shady warehouse, Mike meets up with his new client… Nacho. 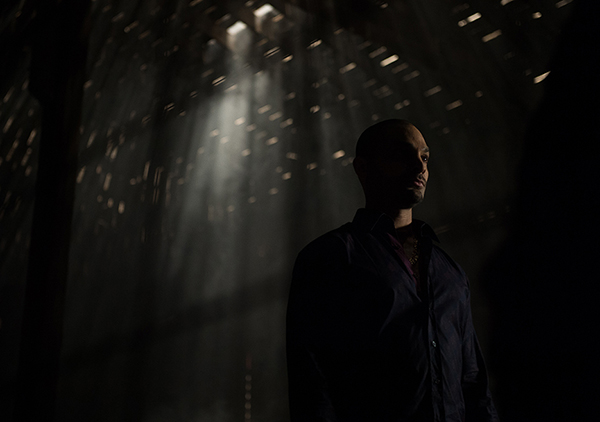 “I’ve got a problem,” Nacho says. “This problem, I can’t solve it myself.”

The episode fades to black.

It seems both of our antiheroes are now well on the way to their eventual downfall.

I’m left with many questions after this somewhat slow-moving episode of Saul and that’s the beauty of this show. Even when it feels like not much happens... so much happens. How will Cliff react to the ad when he sees it, and will Jimmy still have a job at the end of next week’s episode? What will Kim do when she finds out? Oh, she’ll find out, and it will be painful. And what about Mike? Who’s the guy that needs taking care of? Tuco? Somebody new? Or another of our favorite villains from Breaking Bad? It seems most of Jimmy's problems stem from a deep lack of confidence in himself, which is a great juxtaposition to his persona we know from Breaking Bad, Saul Goodman. It seems with every hit he takes to his self-esteem, another piece of Saul falls into place. It's truly a pleasure to watch the painful transformation. Does that make me a bad person?

Tune in next week to find out some of the answers to your burning questions. Better Call Saul airs at 10 pm EST on AMC.