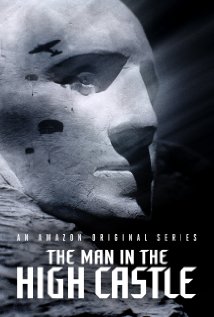 For fans of The Man in the High Castle’s imagery, episode six is one of the strongest episodes yet. As an added bonus, the character development and story chugs along nicely, letting our actors give stellar performances. My favorite episode to date, “Three Monkeys” is what makes High Castle stand out above the rest.

We open as Joe heads to Smith's house for VA Day, a 4th of July type of celebration, heavy on the Americana and dripping with Nazi imagery as the country celebrates the end of WWII in this alternate reality. It’s a postcard image of American life… if you can get past the casual "Sieg Heil"s as they are thrown about.

Joe spends the day with Smith's family. It’s all very “Leave it to Beaver”, down to Smith’s adorable kids and perfectly coiffed wife. Joe cases Smith’s office while getting a tour of the house with his son, spying the Grasshopper file but finding it hard to get the opportunity to take a peek.

Meanwhile, things continue to be awkward between Frank and Juliana and she heads back to the Nippon Building.

In New York, Joe plays catch with Smith’s son and they casually discuss their time in the Hitler Youth, and the boy’s plans for the future with the SS. Smith comes upon them and he invites Joe to come along to the airport to pick up his wife’s mother. 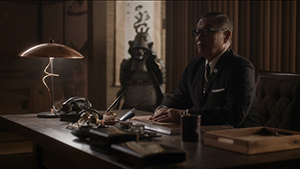 At the Nippon building, Juliana meets with the Trade Minister, Tagomi. She will work for him, greeting guests and making Arians more comfortable. As Tagomi and Juliana size each other up, there’s a certain degree of respect between them, as though they each suspect the other is up to something and perhaps they are both on the same team. As she is led out, she is warned she is not allowed to leave her level of the building without prior authorization. It’s all very ominous and it’s clear Juliana will be in danger if she carries on with her mission for the Resistance.

Jump to Kido, and he is on edge, determined to find the Crown Prince’s would be assassin. Witnesses have described Frank's gun, an antique, and they need to track it down.

Juliana’s stepdad visits Frank. He comes to apologize for what happened to Frank’s family, and to inquire about why Juliana was so subversive when she visited he and her mother. Not much happens in this scene but it plants a seed. Why is Juliana’s stepdad so concerned? Fatherly interest, or is he also playing a game?

Cut to the airport and a great opening shot, showcasing the Nazi’s advanced tech. Smith tells Joe his mother-in-law’s flight has been cancelled and they run into Wegener. Carsten Norgaard’s storyline is such an important part of the narrative and I have to wonder why he doesn’t get billing in the opening credits. In many ways, High Castle is the story of Tagomi and Smith, with Wegener as the connecting string, and for me at least, Juliana, Frank, and Joe are fillers until we can get back to the main story.  "Let's get you fed," Smith says, inviting his old friend back to the house for VA day. This is about more than a friendly get together though, Wegener is evasive about his travels and Smith seems on to him. It’s really more of an insistence than an invite and Wegener seems more than aware of this fact.

At the Nippon Building, the Japanese and the Nazis have a meeting while Juliana serves drinks; she’s paying careful attention to what’s being said and seems to have landed herself a perfect job for a spy for the Resistance.

In the car on the way home from the airport, Wegener and Smith discuss matters of state and the resistance while Joe pays close attention in the back seat.

At the antique store where Frank bought his bullets, the dealer tries to drum up some business for himself over the phone, pandering to his Japanese clientele as always. Kido and Yoshida (Lee Shorten) arrive, looking for Frank’s gun. He's evasive, pushing them off Frank’s trail and telling his story about Matsuda from Tibet. Kido clearly isn’t buying this story.

Back at Smith’s house, an idyllic lunch plays out. Wegener talks about missing his kids and Smith gets awkward when it’s brought up that he doesn’t sail anymore. There’s a story there, I’m sure of it. Joe’s ears perk up as well, but instead we cut to Frank at his factory and move on.

Frank wonder if the phrase “to life” means anything to Ed, but Ed is ignorant to its meaning. We remember this is what was said to Frank at his sister’s memorial by the mysterious man as he left. The two notice the Kempeitei and quickly get back to work. His boss shows up and asks for some employee details to be checked over. Frank confirms his details are correct and his boss moves on. Everyone seems a tad nervous.

In New York, Joe learns a little more backstory on John Smith from his wife and she invites him to stay the night. It’s a great opportunity for him to get closer to the Grasshopper file. Wegener and Smith discuss what Wegener’s been up to. “Am I being interrogated?” Wegener asks. “Yes,” jokes Smith, laughing, but it’s not feeling very jovial.

The next sequence employs a method we are by now familiar with, cutting between Juliana and Joe as they go about their business. Smith’s family huddles around the television, watching Hitler congratulate himself on his victory over America, while Juliana is sent down to get her security pass. Juliana searches for Sakura Iwazaru, and Joe, under the guise of pretzel retrieval, attempts to get a glimpse of the Grasshopper file. Juliana meets a possible friend who works for Mr. Eto, the sleaze bag who wanted a piece of her last episode, and learns Sakura translates to "cherry blossom" and Iwazaru translates to "speak no evil." She’s probably not looking for a person then, and all is not as it seems. Juliana brushes off her questions as a prank from her coworkers. For Joe, not so much is learned, but he does get the pretzels and it seems his subversion has gone unnoticed. I’ll call that a win.

Kido pays Tagomi a visit and his suspicion is high. Kido inquires about Wegener and the diplomatic pass Tagomi arranged. Tagomi lies, insisting the pass was nothing to do with Wegener. I love it when these two share scenes; the suspense is always high and dripping with intrigue. 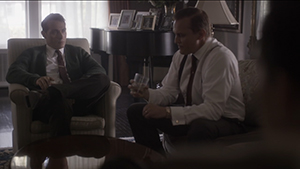 Meanwhile, Smith, Wegener, and Joe chat. They discuss the war. “Nobody talks about the camps,” Wegener says, disgusted, and calling out John for never thinking about it. Both appear full of regret, but while Wegener is distraught and called to action to redeem himself, Smith seems to just throw himself more fervently into his work for the SS. "Now we have a better world," he says forcefully. Joe looks on with interest, saying nothing.

The antique/arms dealer arrives at Frank’s, angry and threatening, but Frank is having nothing to do with him. This scene feels a little ridiculous and over the top, and possibly unnecessary, but at least we know where these two stand, and Frank knows the Kempeitei are onto his scent.

At the Nippon Building, Tagomi and Juliana meet. Tagomi tells her how important trust is to him, and she reveals how Aikido has taught her body language. She tells him that the Nazis are hiding something and he thanks her for her observations. She eyes her necklace but says nothing and is dismissed.

Returning home, Juliana and Joe get into a fight. He’s waiting at home like a disgruntled housewife and Juliana is apologetic. But Frank is pissed; he doesn’t care about the films or the Resistance. He claims he was happy before all this started and she laughs at his naiveté. She reveals she has a job for the Resistance at the Nippon Building, that she killed a man in Canon City, and that she had help from a man from the East Coast. He seems concerned about her job, and even more so about her killing a man, but mostly, he’s pissed about the fact she had help from another man. This scene annoys me; accurate as it might be for the time period we are dwelling in. Is the fact that she was with another man really more important than the fact that she killed a Nazi agent? Come on, Frank. Get it together, boy!

Joe and Smith sit outside discussing Wegener. Smith reveals he knows Wegener is lying about his trip to the Pacific States. Wegener is the reason for the trip to the airport; his mother-in-law has been dead for two years, his wife was in on the ruse. Smith was hoping Rudolph would have confided in him.

Rufus Sewell is amazing in this scene, mourning for his lost friendship and knowing what he has to do as an SS agent. "Me and Rudolph, we performed duties together that bond men. They bond men forever," he laments. And then the Nazis show up at the door to take Wegener away.

“Emotions can’t be allowed to interfere with what is right,” Smith says. “Sacrifices have to be made,” Joe agrees with coldness.

Sheesh! Just as I start liking these guys, they off and remind me they are Nazis again.

At the Nippon Building, Juliana realizes the rooms are named after flowers. She meets up with her new friend who works for Mr. Eto again, and asks for help finding Sakura Iwazaru claiming, “The next time that bastard demands personal services, at least you’ll know you screwed him too.” I wanna give her a high-five for that line and I’m pretty sure she will get the help she needs.

Cut to Frank, as he arrives at the man who attended his sister's memorial service’s house. We learn the man lost his wife and a child as well. He asks if Frank would mind if he said a prayer.

In New York, Joe forlornly looks out a window.

In the Nippon Building, Juliana looks for her room.

Frank and the small family start a Jewish prayer.

In the closing scenes we cut between the three.

Juliana, under the guise of delivering tea, finds what she’s looking for. She discovers a phone call monitoring room; when a conversation mentions The Grasshopper Lies Heavy, it's written on a card and placed in a bin. She grabs the card… and spots her stepfather working in a back room. Crap!

Frank finally has his moment of catharsis as the prayer goes on, breaking down and weeping. This seems like a turning point and I hope Frank’s character can move on from the events of the first episodes and begin a more useful endeavor. Wow, that sounded cold, didn’t it? But I think you guys know what I mean.

Meanwhile, Joe finally gets his hands on the Grasshopper folder in Smith's office. But… it's empty! The light flickers on as a lead brick settles into the pit of my stomach. Slowly, Joe turns around. Smith stands in the doorway, a knowing smirk on his face. The screen fades to black.

Visually this episode was fantastic. I love that we spent so much time in San Francisco, and the trip to suburbia to meet Smith’s family was a welcome one. The normalcy of family life in this alternate universe was as unsettling as always and I loved it.

You can watch The Man in the High Castle on Amazon Prime.