With ten seasons, two movies and countless stories through fiction and comics books, it’s surprising that The X-Files universe has somehow managed to avoid tackling the JFK assassination apart from a brief mention in a less than loved original run episode. Not a franchise to shy away from conspiracy theories, the mother of all conspiracy theories is finally getting its due respect in the latest from IDW Publishing with The X-Files: JFK Disclosure, a two-part special written by Denton J. Tipton and with art by Menton3. It’s all timed to tie into this week’s public release of the until-now sealed files related to Kennedy’s assassination and we’re excited to see what spin this team takes on it.

Read the full recap and review after the jump. Beware, spoilers ahead.

We open with a bang, literally, as Menton3’s beautiful artwork depicts the lead-up and awful conclusion to one of the most tragic moments in American history. In an ominously drawn history lesson, the narrator informs of patsys being set up, false flags being established and of a seemingly reluctant assassin getting to work. It all ends with a familiar scene: an open limousine, Jackie in pink, a bullet to the head. Nevertheless, the visual will still give you chills. 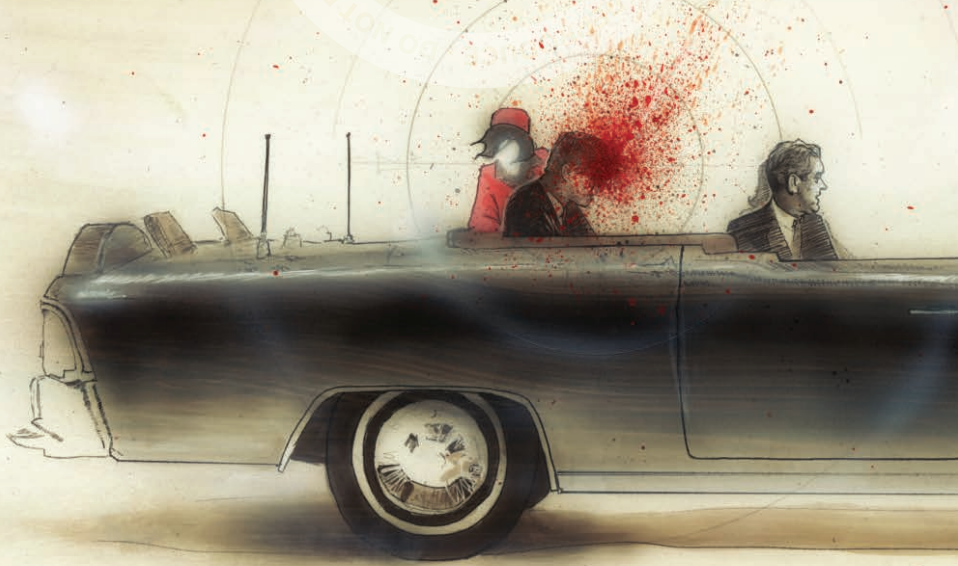 Cut to the present day and FBI Headquarters in Washington D.C. Scully is needling Mulder about his age after he receives a phone call from a retirement community. Apparently, he’s been avoiding recurrent calls from the place. Mulder gripes about having to screen his calls after receiving a deluge of callers regarding “Pizzagate,” but Scully reminds him it’s his own fault for putting his contact info up on 4Chan. I take a moment to chuckle and revel in the gorgeous artwork. Menton3 has a knack for capturing the likeness of Duchovny and Anderson that few comic artists possess, focusing not only on resemblance but accurately depicting facial expressions that will feel familiar to any viewer of the series. 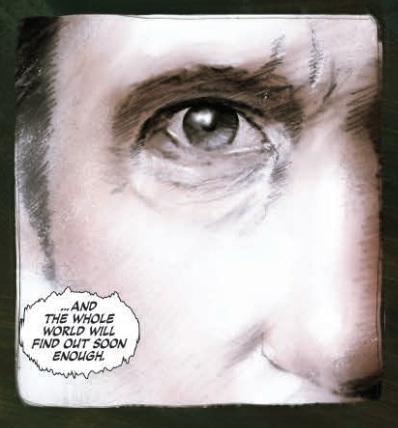 The phone rings again, but this time, Mulder answers. A man claiming to be an old associate Mulder’s father has a story to tell but Mulder isn’t really buying into it. Mulder plays along but it’s not until the final panel of the scene when the mysterious caller drops the bomb that he helped Bill Mulder assassinate JFK and that the whole world is about to find out that it’s clear the caller has Mulder’s attention.

Back to our history lesson and this time we go all the way back to the 50s and Las Vegas, Nevada. It’s boom time in Vegas and the mob has its hands all over it. But the bright and shiny atmosphere soon turns dark as men we are later introduced to as “Mr. Hunt” and “Mr. Mayhew” are caught up in a confrontation with mobsters, leading to a bloody resolution in a back room. Victorious and having taken care of the goons, the two men who claim to be a part of an international syndicate meet with the mob’s boss and they soon get to talking about Castro. The mob has a score to settle with the dictator after their plans for Cuba went to hell and it’s not long until the two men from the syndicate are offering one hundred and fifty grand for the mob to take Castro out. The boss is so gung-ho about settling his vendetta, he offers to do it for free.

In the present day at the retirement village, Mulder meets with our mysterious caller and we learn he’s a member of the mob, tying us back to the 50s storyline. He’s making his deathbed confessional and is a tad cranky as Mulder needles him about the failed attempt on Castro’s life. He hasn’t summoned Mulder for that, he’s talking so he can clear the mob’s name in the killing of JFK. This perks up Mulder’s interest and he asks if the man really does know why Kennedy was killed. 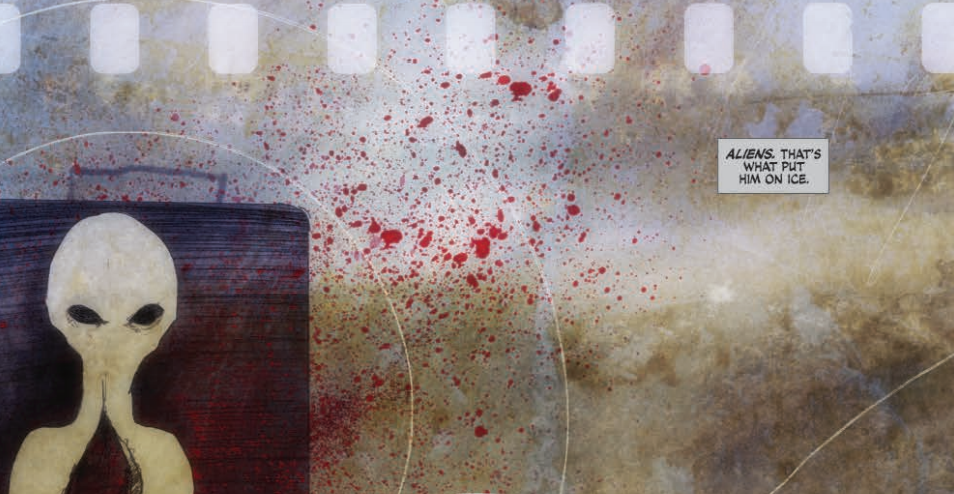 This ends part one and… I have a lot of questions. I found the writing to be sparse and I wasn’t a huge fan of the storytime format when combined with jumping around in time. A few times I had to flip back to reacquaint myself with where I was and who was speaking. That being said, a load of loose ends has been laid out and Denton Tipton has my attention. Being both a fan of The X-Files and a lover of conspiracy theories in general, I look forward to the slant Denton will put on the JFK assassination but worry about how it’s possible to conclude it all in just one more issue. I’m also kind of bummed about the lack of page time for both Mulder and Scully, but especially Scully. Couldn't she have come for the ride to Shady Acres?

The art in this issue, however, is gorgeous. Menton3 shines and creates a level of tension and foreboding, filling in the gaps where the story might lack, and it was his work that left me wanting more.

Onto the covers. While the A cover by Menton3 is lively and has all the elements to set the scene, it’s the B cover with art by J.J. Lendll that captures my imagination. Sepia tones and shot through with a bullet, I felt like it better represented the emotion the issue brings.

The X-Files: JFK Disclosure is available now. You can pick up a copy from your local retailer or head on over to IDW publishing. Stayed tuned for our review of Part 2, the conclusion to this exciting story, in the weeks to come.