The X-Files: JFK Disclosure is back with its second issue and conclusion this month and I’m happy to report the dynamic duo of Denton Tipton and Menton3 didn’t disappoint. The truth of JFK’s assassination is finally revealed and Mulder will be forced to decide between his family’s honor or his quest to reveal the truth in all of its ugly glory for all to see.

The X-Files: JFK Disclosure, issue #2 is available now. Hit the jump for our full recap and review.

We open where we left off with Mulder and Mr. Sacco at Shady Acres discussing Kennedy’s assassination. Mulder’s a little eager and trying to jump ahead but Sacco puts him in his place; he wants to tell his story his way.

We head to Key Biscayne, Florida, circa 1960 atop a lighthouse as Mr. Hunt (CSM) and Mr. Sacco discuss the plan to train a secret death squad to take out Castro. Max Gomez arrives mid-conversation. He prefers to be called a “freedom fighter” and is an ex-Havana vice cop and assassin for the mob in Florida. He’s exactly what they need. Hunt pulls out his alien-tech gun and takes a shot, hitting a lackey down below with ease. Sacco is impressed and asks him where he got it. Hunt says he got it in the desert.

Naturally, this perks up Mulder’s ears and we switch back to the present so Mulder can inquire about the aliens. He wonders if CSM flat out told Sacco about the aliens but Sacco confirms that it wasn’t in so many words. It didn’t need to be. He’d never laid eyes on a weapon like this one. 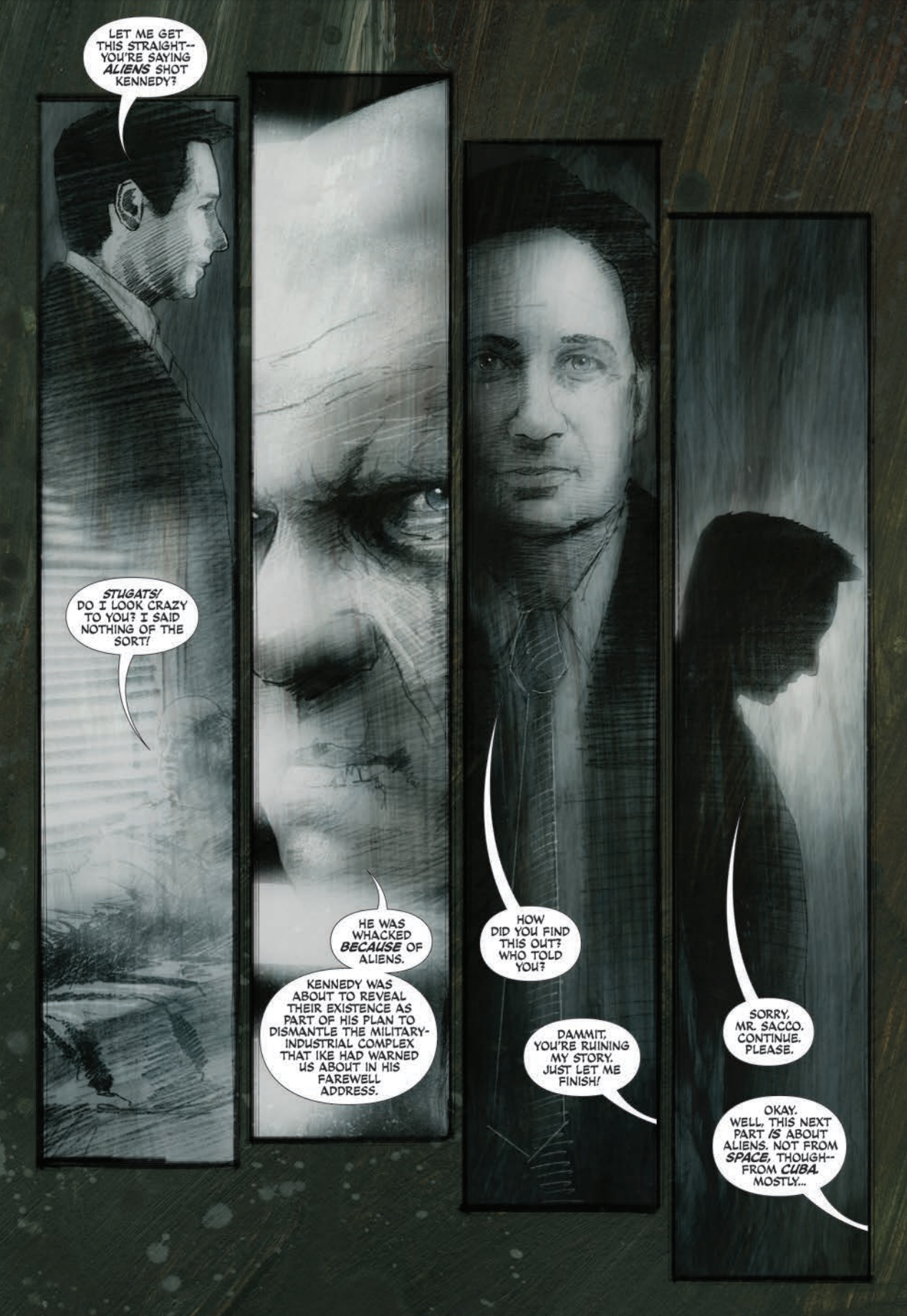 It turns out with JFK winning over Nixon in the election of 1960 and the Bay of Pigs invasion being the complete fiasco that it was, a wrench was thrown in their plans, and the plans had to change. The side-op to kill Castro was off, and with Kennedy threatening to disclose the alien story, JFK had become the new target. This is where Oswald comes into play and we come to JFK’s fateful visit to Dallas.

In Dallas, CSM and Sacco discuss setting up Oswald as a patsy and recruiting Jack Ruby to take him out in the Texas Theatre. Ruby, a friend to the mob and known to Sacco, has gotten himself into hot water in Havana’s casino and owes them a favor. Alas, things go wrong after JFK’s assassination and Oswald is picked up before Ruby can take him out in the theatre. Never fear, though, CSM sets up the infamous garage shot at Oswald and history is written.

Mulder jumps in, questioning why Sacco would setup Ruby when he was supposedly trying to restore the tarnished name of the mob. Sacco explains that CSM was the “Black Knight” in this operation and Mulder skeptically asks if Sacco’s motivations were nobler. He replies that money and respect were all that mattered to him. He was no hero, either, and eventually, the “family” wanted him dead as well.

He turns it around on Mulder, asking, “but what about your family?” letting Mulder know his name is gonna be tarnished if the truth is revealed to all. 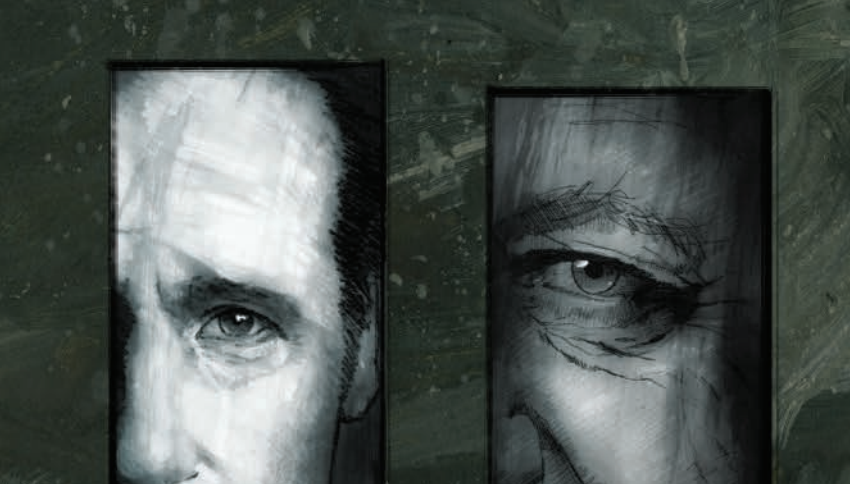 I’m gonna stop here for a second to quibble. Will Mulder’s good name really be tarnished if all this comes to light? After all, CSM is a “Spender” or even a “Hunt” in this story. And though we know CSM is Mulder’s dad, they aren’t exactly bosom buddies and it’s not common knowledge outside of the key players of the shady deep state in XF lore. Or maybe I’m mistaken. Feel free to correct me in the comments.

Mulder wants to know why Sacco is giving the evidence to him, of all people. Sacco explains that he owes it to CSM. That CSM was his only friend in the world. We take one last flashback to 1963 as CSM and Sacco are parting ways. Sacco tells CSM he knows why the mob, and maybe even anti-Castro Cubans might have wanted JFK killed, what he isn’t sure about it why CSM wanted it to happen.

CSM explains that Kennedy wanted the military’s knowledge of life from other planets exposed, that he wanted to make sure Ike’s warning in his final address of the military-industrial complex did not come to pass and that he was going to reveal the military had commandeered alien technology. CSM couldn’t allow this to happen because he believed that same technology was the best chance for humanity’s survival. Making his final payment to Sacco CSM warns him not to tell anyone and Sacco kept his promise until 1976 when he was brought before the House Select Committee. Rather than getting angry with Sacco for talking, CSM then helped him get into witness protection where he has remained to this day. Turns out Sacco’s testimony never saw the light of day and didn’t implicate them anyway.

Mulder is a little dumbfounded that JFK would have revealed all this to a world on the brink of WW III and Sacco explains that Ike’s warning had already come to pass. There was too much profit to be made and too much at stake. Kennedy had to die. He hands off a file with his sworn testimony to Mulder and leaves him with the parting words that the choice is Mulders'.

We return to D.C. as Mulder is entering Skinner’s office. Mulder hands off the file to Skinner and leaves without a word. A very confused Skinner is interrupted by a voice from the shadows. It’s CSM.

We are left with an ominous warning from CSM. No matter who you are, he can take you out at any time he wants.

But today’s not the day.

Part two of The X-Files: JFK Disclosure did a great job answering a lot of questions raised in part one. That being said, I did still have some issues with the story as a whole. Possibly because I’m not particularly well read in either the JFK assassination nor its surrounding conspiracy theories, at times, I had to stop and piece together parts of this story. Dates, places, names; things had to be Googled. It’s possible I’m not the target audience but I would have liked just a tad more exposition to go along with what is mostly a dialogue and character driven story with very little fluff. I did follow along a lot more easily this time with the switches from past to present and that was a welcome change. Overall, the story was a good read and apart from my issue with Mulder’s parentage and how much he’d really care if CSM were revealed to be behind JFK’s assassination, I’d recommend it.

I did have one not so small issue. There was literally zero Scully this issue. Not a mention, not a cameo, not even a hint. I’m mildly offended on her behalf.

Menton3 was the star of this issue. Sonnets should be written about the art. It’s dark, it’s moody, and it’s accurate. It conveys a lot of emotion that’s missing from the sparse dialogue. There are panels I’d happily frame. If there are awards, give them all to Menton3.

There are two covers this issue. The A cover by Menton3 and the B cover by J.J. Lendl. Once again, I find myself drawn to the B cover. While I flail over Menton3 within the story, J.J. has my heart for the covers. 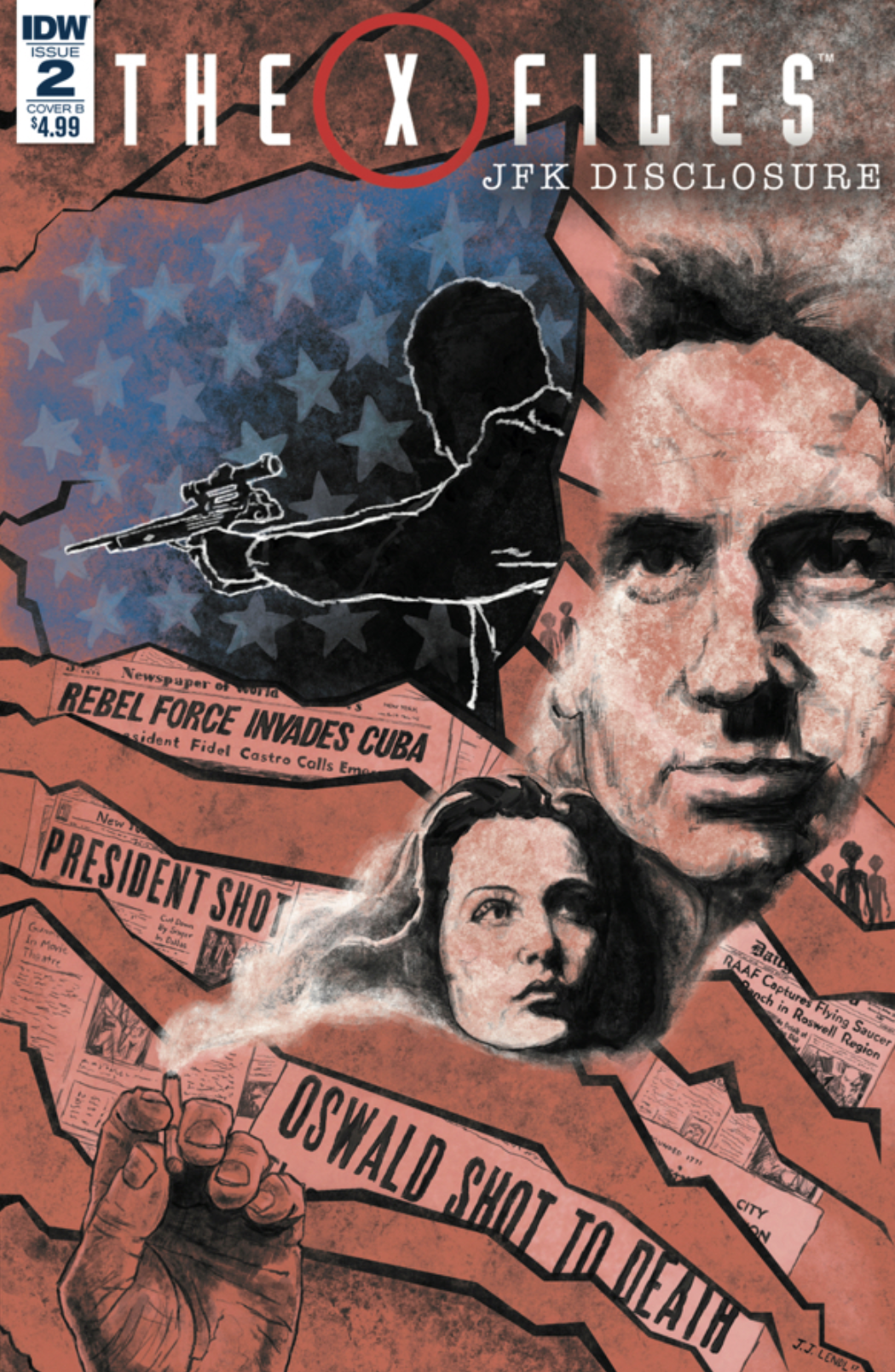 The X-Files: JFK Disclosure is available now. You can pick up a copy from your local retailer or head on over to IDW publishing.