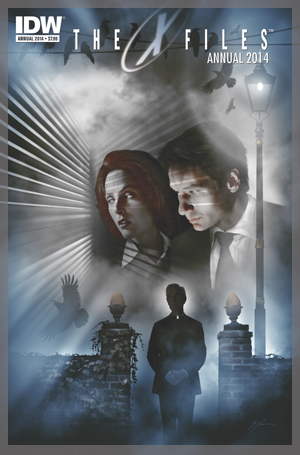 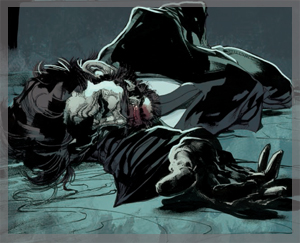 Wayne Gold is killed by loan sharks to whom he owes a significant amount of money, but when he dies, his spirit stays in this world as heâ€™s trying to protect his wife and unborn child from falling into their grasp. In trying to do so, he manages to communicate to her via his cellphone. This upsets the spirit of a priest who has the mission to guard the afterlife, it seems Wayne and his wife have â€œviolated ancient lawâ€ by communicating after his death. It becomes Mulder and Scullyâ€™s mission to protect her from real life and afterlife threats, helping Wayne to crossover to the other world.

The story is simple enough to be engaging without having to resort to complicated tools, a classic X-File, and the characters were true to the early seasons Mulder and Scully that they embodied. The main vein of the story remained in the relationship between Gold and his wife, in his desperate mission to protect her; his anguish felt real and it reminded me indeed of episodes in the first couple of seasons. Though I almost wish that the other ramifications of Wayneâ€™s threats could have had a little more space within the issue, as I found the priest story very attractive, I wasnâ€™t lacking anything to be satisfied by the turnout of this story. 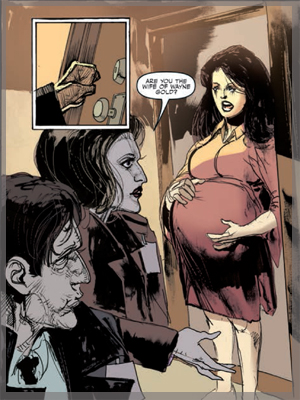 For me the disappointment, and take this with a grain of salt, was the marriage between the art and the story. I believe that Sayger can execute very well, and my comments do not refer to his drawings or Lopesâ€™ colors and their ability to create moods that are engaging and obviously show demonstrated skill and talent. The problem for me is the lack of consistency between the characterization of these very well known icons, such as Mulder and Scully, and then, the choices that were made to embody the emotional state in which the characters were at times.

In the case of our heroes, either you make the choice to draw them life-like or at least recognizable, or you portray them in a novel way that becomes part of the artistic license that youâ€™re taking with the issue. In this case, even when theyâ€™re supposed to be the younger versions of these characters, there are features that seem very different from one frame to the other, from one panel to the next, which becomes a distraction. It also doesnâ€™t help that, in my opinion, the expressions chosen for the wife, and in some degree for other characters, donâ€™t feel natural for the dialogue or the emotional state carried in the scene; a bit over the top and counter productive to the powerful story being told between Wayne and his wife. This is really important because I felt that I was being pulled from opposite directions while reading, and not in an intended way. 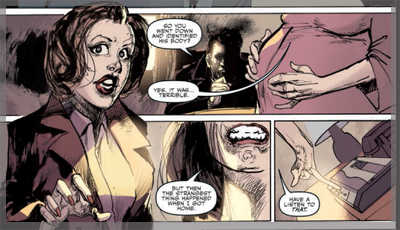 â€œTalk to the Handâ€ written by Dave Sim. 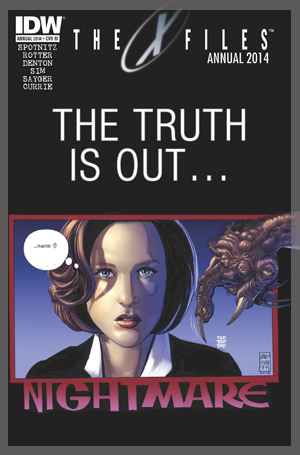 Scully is visited in her dreams by a rather disgusting hand, whose skin is full of eyes, and that claims to be the embodiment of Adam, her high school sweetheart. In this dream state, the hand carries on a conversation with her, where he reveals that theyâ€™ve held the same dream state conversation since the last time they saw each other. He gives her the option to contact him after all of these years, because he claims that she could love him more or as much as she loves being an FBI agent.

Heâ€™s giving her the opportunity because this could be the last time they â€œtalkâ€ - his normal self is about to meet a woman that could become his one and only, the one that will make him forget her. â€œAdamâ€ tries to persuade Scully by presenting her with the possible future that they could have together, if she were to follow his instructions on how to contact him, preventing then the reality where they no longer love each other. The caveat is that she will only be able to call him as soon as she wakes up if she truly does love him more than being an FBI agent. Guess what choice our G-woman made?

For this second one included in the Annual, I had to do some research as to not hastily review a story without knowing the value behind Simâ€™s approach and background. Iâ€™ve said it before, Iâ€™m a newbie when it comes to comic history in some aspects. Of that, Iâ€™d be at fault. After some of this research, I have to admit that I was able to look at this story with a different set of eyes, overcoming the initial shock that was left after my first read. Perhaps this makes this review not a completely spontaneous one, but I needed to have a better footing on this.

This is a bold yet exciting choice that IDW took to present to audiences that may not be as used to this style of story. I have to applaud them on that, but the problem I find with it is that it took me some research to appreciate it, and I do, because Cerebus is quite an important part of comic book history and thatâ€™s something I can enjoy. I actually enjoyed my research because I rekindled with stories that Iâ€™d forgotten Iâ€™d read before in my childhood. My fear though is that many readers will not â€œget itâ€ and I donâ€™t blame them; I hope that those will continue their comic book education by investigating, just like I did, or that Iâ€™m indeed underestimating the audience of these comic books and Iâ€™m proved wrong.

Having said that, the story is candid, and best enjoyed with an open mind, because when you do, is actually rather comical. I mean, weâ€™ve all had logic-challenging dreams filled with impossible things such as bitter, chain smoking unicorns, right? Or is that just me? Though I find the age choice for Scully to be a little too on the older side which wouldnâ€™t match the canon of the show, Currieâ€™s art and Rodriguezâ€™ colors, are good and to the point. Iâ€™m not saying this because I prefer to have artwork that is â€œnaturalisticâ€ in some sense and more into copying the looks of the actors that embody these characters, but because I enjoyed it more since the art served its purpose: to communicate the story effectively.

All in all, I declare this Annual a good ride, definitely worth the read and it will be a great collectorâ€™s item. The covers by Shearon and Sim are quality work; I personally prefer Shearonâ€™s photo collage because of the eye-catching story elementâ€™s mix.

I encourage you to share your thoughts directly with the publishers at This email address is being protected from spambots. You need JavaScript enabled to view it. or you can also reach some of the authors through their twitter feeds: