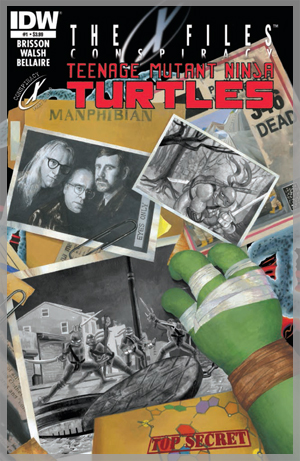 In my previous review of this series, I made the observation that these comics are the equivalent of watching The Lone Gunmen show. This latest edition convinced me even more; its comedic timing reminds me of some of the funniest episodes of the short-lived series.

For those that have been following the Season 10 comics, you'll appreciate the familiar strokes of Michael Walsh, ink by Adam Gorham and colors by Jordie Bellaire. The X-Files: Conspiracy - Teenage Mutant Ninja Turtles was written by Ed Brisson and edited by Bobby Curnow and Denton Tipton. Covers by Miran Kim, Michael Walsh, and Brian Corroney and Brian Miller.

My review follows after the jump. Beware of Spoilers.

This issue brings us to the realm of the fan favorite episode â€œBad Bloodâ€ from the fifth season of The X-Files. While the Lone Gunmen continue to search for the truth behind the reports from the future that predict the demise of humanity, they have to find the Teenage Mutant Ninja Turtles, who they suspect may have in their blood a clue to the cure for the virus about to attack the world. As it happens, the Turtles are currently holed up in a small town that suffers from a vampire infestation. A couple of teens investigating this try to snap a picture for the world to see, but instead unveil the presence of the mutant amphibians and allow the Gunmen to track them down.

As it turns out, this â€œvampire infestationâ€ is none other than the already known troop that we get to meet in X-Filesâ€™ â€œBad Bloodâ€ - complete with Sheriff Hartwell and Ronnie Strickland. The latter attacks April and Casey while theyâ€™re out for pizza and the TMNT and the Gunmen come to their aid. A fight breaks out, and other vampires get involved as well, frustrated that Ronnie always ruins it for them. While the turtles fight back, the gunmen call Mulder for some desperate assistance. He recognizes the story that the gunmen tell and advises on how to beat themâ€¦ by hitting them in their weak spot, their compulsive OCD, and spreading chili flakes everywhere.

This seems to stall the brawl; the vampires try to make a compromise, to leave the town immediately, but the turtles donâ€™t agree, going after them. Itâ€™s in the midst of this that the gunmen stop them and try to get them to cooperate and try to solve the impending virus mystery. Unfortunately, they donâ€™t believe the â€œproofâ€ from the future that they are shown and they leave. 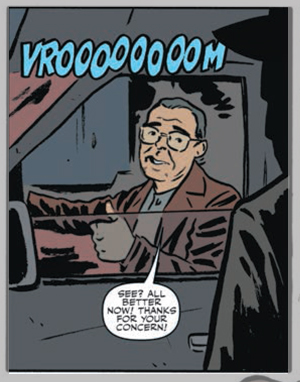 Later on, as the gunmen leave defeated after not finding cooperation from the mutants, Leonardo intercepts them to learn more about the gunmenâ€™s argument. He agrees to help after seeing and hearing all the proof in detail, not without warning that if the gunmen are lying, the TMNT will hunt them down.

I have to say that I continue to appreciate this comic series for what it is, instead of dwelling on what it isnâ€™t. I liked the characterizations, I enjoy the humor that Brisson let so naturally flow, I don't consider myself a gigantic fan of TMNT but I sure enjoyed revisiting the old days; I find that the pace is right. Iâ€™m a fan of Walshâ€™s work all the way, so for me this was a great issue in that regard. I do question why we had to revisit â€œBad Bloodâ€, even though itâ€™s one of my favorite episodes of the original series. I was quite pleased with the originality of the previous two issues; I find that the overall arc is being driven forward with each installment. I like the hunt spread throughout all these realities, but I would have liked it more if we had been presented with a brand new mini case for this issue.

The next issue tackles the Transformers, and as a huge fan of this franchise, I canâ€™t wait to see what it has in store for all of us.

Hope you picked up your issue already and if not, rush over to your local store, because they sell out fast! As always, our recommendation is to order ahead of time, and also consider buying your subscription through Comixology to enjoy these comics on your tablets and smartphones.