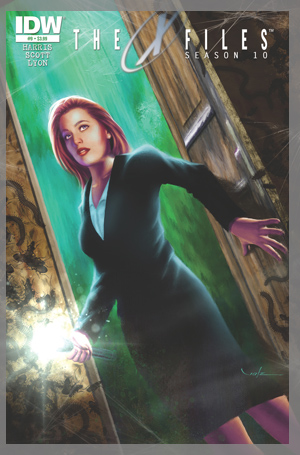 I love that time of the month when I get new X-Files comics; I particularly loved it this time around. The X-Files: Season 10 - #9 had me so enthralled that it allowed me to forget that thereâ€™s a civil war in the making in my home country. I wonâ€™t bore you with those details though, because weâ€™re here to talk X-Files, and boy, will we.

â€œChitterâ€ - the 9th issue of Season 10 - tackles you to the ground with a teaser that is sure to make you squirm, and which continues to speak of Joe Harrisâ€™ gory imaginary, and Greg Scottâ€™s ability to put to image a story that has nothing to envy the TV and Film version of The X-Files. Perhaps this is what I liked the most about this issue, but I digress. This is a one shot that is more loaded than perceived at a first glance, especially for those that have followed closely along with the William storyline.

This issue was written by Joe Harris, with art by Greg Scott, colors by Art Lyon, letters by Robbie Robbins, edited by Denton Tipton and executive produced by, of course, Chris Carter. The regular cover was designed by Carlos Valenzuela, the RI cover is by menton3 and an additional subscription cover features a picture from Frank Spotnitzâ€™ episode â€œDaemonicusâ€.

More of this review and a lot of spoilers after the jump. 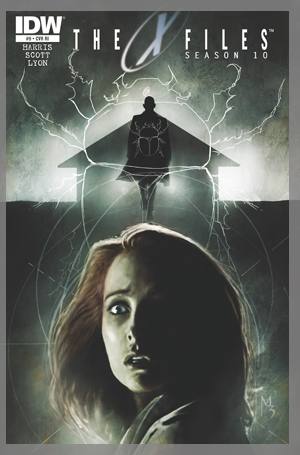 If youâ€™re wondering what this issue will be about, well the covers should clarify it for you pretty well: itâ€™s all about Scully. I love them both, but I have to admit that menton3â€™s cover is my favorite. Itâ€™s dark and mysterious and describes in a clever juxtaposition exactly what this issue made me feel.

Mulder and Scully are called out on the field to Millersburgh, Pennsylvania, where they join their newly appointed Assistant Director, Morales, and investigate an anonymous tip that leads them to a suspect in a kidnapping case. I have to admit to being especially giddy to see them with their FBI jackets on again. It makes me want to have Fight The Future on repeat in the background or read this issue with Mark Snowâ€™s soundtrack playing through my speakers.

While sitting on a stakeout at the suspects house, Scully perceives a smell that affects her so much that she faints just in time for the suspect to emerge from his home, begging to be killed, but heâ€™s escorted to the field offices for interrogation. Right away, I had a flashback to â€œRequiemâ€. I keep comparing the issues every month to episodes that they remind me of, but donâ€™t get me wrong, this story has its own legs.

Mulder is not quite sure that they have the right guy, but all leads point out to Keansey; personal effects from the victim, a creepy hide out and a â€œkill roomâ€. This sequence is told in a very dynamic narrative by Harris and Scott, with great attention to detail when it came to setting up the world of this kidnapping suspect. Art Lyon did a fantastic job too, coloring the scenes, complementing the gritty feel that is the overall ambiance of this edition. Scullyâ€™s worries continue as Keanseyâ€™s debriefing gets stalled by his lawyer, and the omnipresent narrative starts to point to ritualistic undertones that lead us to think that Scully might be in bigger danger than theyâ€™re aware.

While Keansey is held overnight, Scully and Mulder regroup as they study the possible outcome of the case, and wonder if he could be working with an associate. Scully agrees to canvas the neighborhood the next morning for possible leads. I really love how their banter has progressed in Harrisâ€™ writing. Itâ€™s flawless in my opinion in this issue, and Scottâ€™s work does wonders capturing the facial expressions that these characters have almost trademarked.

The next morning, Scully visits and shares tea in the home of Mrs. Hoynes, one of the neighbors previously seen when Keansey was arrested, while Mulder discovers that he has vanished into thin air inside his cell. Mulder makes a connection and urges the deputies to warn the FBI Field Office: whatever took Keansey is after Scully as well. Iâ€™m still not quite sure how we get to this conclusionâ€¦ but, hey, this is Mulder: the King of lucky leaps.

Meanwhile, Hoynes starts reading the leaves in Scullyâ€™s tea and makes revealing suggestions about her past, like the fact that she may have lost a childâ€¦ or two. Sheâ€™s uneasy about where this conversation is heading and tries to make her way out when Hoynes reveals that sheâ€™s the one behind the disappearances. Sheâ€™s led by the voices of a â€œChittering Godâ€, a phenomena that attacks Scully in the form of thousands of roaches.

Mulder rushes to the vicinity of the house while insects continue to attack Scully as Hoynes urges her to â€œacceptâ€ that the â€œChittering Godâ€ has taken her as a tribute, making them both stronger. This made me take a deep breath, because thereâ€™s just so much that this character has gone through. Itâ€™s no coincidence that at some point during the height of the show, the internet crowned her a Saint.

As Scully tries to get away, she falls into the basement and discovers numerous other â€œtributesâ€. She defies Hoynes motives, confirming that she might be right about her fears but that she wonâ€™t let her kill her. Mulder arrives just in time to save her from being sacrificed and this is great, because whenever Scully is in danger, I try to calm myself down by remembering that Clyde Bruckman said sheâ€™s immortal.

Once Hoynes is apprehended, and theyâ€™re relieved that the Bureau will be pleased with the missing personâ€™s cases that theyâ€™ll close with the basementâ€™s findings, Mulder wonders about Scullyâ€™s well being. She cannot answer that sheâ€™s alright just yet, possibly skirting away from a confirmation to a shocking revelation or more vulnerability than sheâ€™d be ready to admit, but she makes a comment about the being that Hoynes believed in and channelled: â€œan entity that fed on despair and painâ€ - meaning that their original suspect had been a victim instead of a perpetrator, meaning that this being saw something in Scully that is not resolved, and perhaps never will be. Because, god, has this poor soul suffered. 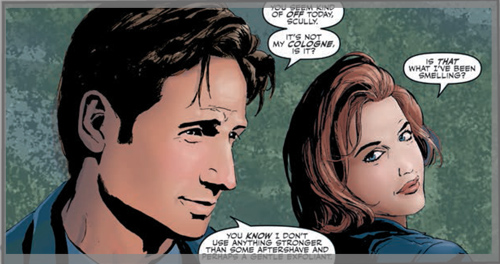 I had been asking for a lift off for this series; revisiting is always great and was executed quite brilliantly by the team behind these comics, but what certainly excited me about Season 10 was the possibility that Harris would have to come up with new characters, new monsters, new conspiracies, or a fresh look into the old one.

Even when this storyline visited old issues, â€œChitterâ€ is a great example of what I was asking for. It extends its tendrils to new horizons while still keeping tabs on the history of these characters, setting sails for this ship to move forward. I certainly appreciate things from the writers perspective that I could geek out about, from the narrative style, that doesnâ€™t dwell on the unnecessary, to the use of resources that keep the pace, building up and giving pause in the right places, allowing the reader to ride the rollercoaster that should be an enthralling tale. I always wish though that we had more than 22 pages to enjoy.

Next month brings us issue #10, titled â€œSmoke and Mirrorsâ€ - you can anticipate whoâ€™d be the center of that story. As always, you can get yourself a copy from your local comic book store and read this issue over and over, like me. You can also download to your iPhone, Android or iPad via Comixology.