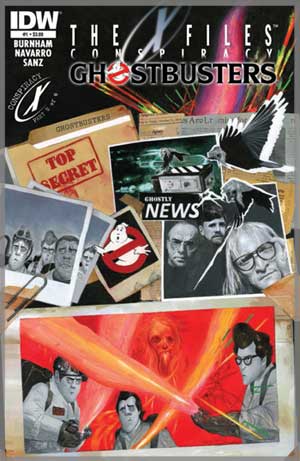 The X-Files: Conspiracy #1 - Part 2 - Ghostbusters continues the storyline started in the premiere of this new series, but with an obvious new guest star in this crossover. For anyone reading "Conspiracy", I think one of the things you should take into consideration, in my opinion, is that this is the equivalent of having The Lone Gunmen TV show as a comic book series.

Click after the jump for our spoiler filled review.

This is what’s going on so far: “The Lone Gunmen have received an email with disturbing reports apparently from the future. After the stories were corroborated by FBI agents Fox Mulder and Dana Scully, the Gunmen began investigating the various urban legends mentioned in the documents, starting with the Ghostbusters…” And so the boys head to New York City to have a rather eventful chat with the parapsychologist trio.

While Frohike, Langley and Byers pose as journalists to infiltrate and interview the Ghostbusters - Venkman, Stantz and Spengler, in their lab - the boys manage to unleash an extraordinarily dangerous class five that goes wandering through the firehouse, much to the chagrin of everyone.

The Ghostbusters and The Lone Gunmen split up to try to catch the notorious entity, all the while getting a crash course into the activities of the renown doctors. They finally find the fugitive spectrum when it sneaks up on Langley, but trapping it is not so easy. The class five has a lot more telekinetic power than they had anticipated. Once the commotion is over the Ghostbusters question the boys’ presence at their headquarters. They all but anticipated the reason of their visit, but the Gunmen play it down without oversharing the real source of their investigation… just their “genuine” interest in the experiments being done at CERN. 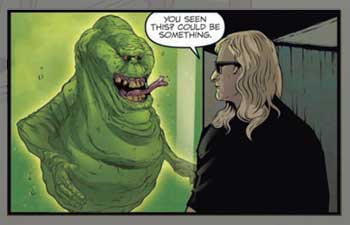 According to the Ghostbusters, “the Higgs Singlet can be used to send electronic data packets back through time, photos, videos, reams of text…” but the problem is that there isn’t a man made system that can withstand travelling through time. So the possibility exists, but we may not be ready yet. The Ghostbusters' suggestion is that an entity such as a ghost would be “immune” to the stresses of time travel, but only a highly intelligent one would be able to achieve the feat, which presents a challenge, since it wouldn’t be something a human can control.

Just as the Gunmen leave on their way back to Washington, half heartedly assessing the success of this visit, they learn that there’s a deadly outbreak in Virginia, one that has hundreds of confirmed infected subjects and that could result in an American pandemic.

I have to congratulate Erick Burnham for writing an issue that advances the story in a couple of aspects that I hope are foreshadowing events in the next issues. Something delicate about these crossovers is the way the writer melds the universes without it being unfair to each franchise. Burnham does an effective attempt at it, having the Gunman question the reality of the events happening around them, without making it a task to convince, just to expose them; it’s up to the guests in this reality to either believe, or not.

The inclusion of numerous Easter eggs and references will for sure be recognizable and delightful to any Ghostbusters fan out there. Erick has captured the Gunmen’s personalities effectively without going overboard and that’s something that I’m sure a lot of us appreciate. The issue delivers an effective cliffhanger that ensures our interest for the next installment, The X-Files: Conspiracy #1 - Part 3 - Teenage Mutant Ninja Turtles.

My only complaint, and let me make myself clear, this is not really a complaint per se, is that you probably need to sit down with this one with enough time to read it through a couple of times. It took me a second read to understand the scope of the scientific facts and reasoning without rushing it and enjoy the full meaning and purpose of the issue. This is not a general condition to everyone but perhaps an aspect to bring up, since not all of us pick up on these topics with the same speed.

Salvador Navarro’s artwork and the colors by Esther Sanz are really good. Navarro does a excellent job capturing the facial expressions, and this was great with all the reactions to the humorous banter and over the top matters that we’re presented with and that the characters go through. I really enjoyed some of the subtleties in their features. Sanz colors really highlights the issue, using a palette that lets us know that we’re truly in Ghostbuster’s territory and setting it apart from the Gunmen’s reality. Other credits go to Shawn Lee in letters and edits by Tom Waltz and Denton J. Tipton.