The folks at Better Call Saul keep outdoing themselves, and this week’s episode, “Nailed,” was no exception. As the truth starts to reveal itself even the most minor of characters get to suffer the consequences. The penultimate episode of season two keeps us on the edges of our seats and clamoring for the season finale.

Hit the jump for the recap and review.

On a deserted highway in the middle of the nowhere, somebody nails a spike into the ground. Meanwhile, our favorite ice-cream truck driver from last week happily sings along to the radio as he drives his load back to the border. Standing behind the bushes is a figure in black. He pulls a rope and… oh hey! It’s Mike and his trusty homemade spike strip! 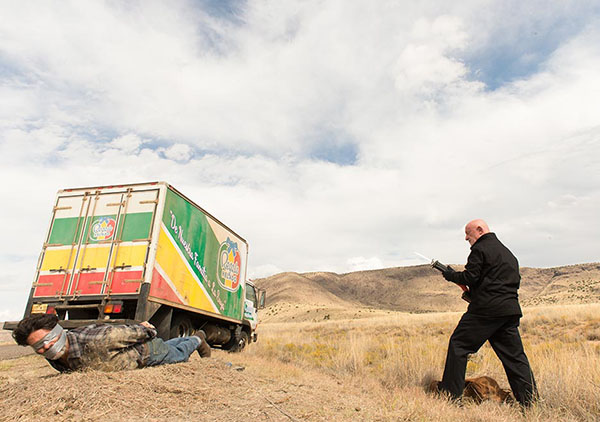 From behind, he binds and blinds the driver and sets to work looking for his score. Taking a Sawzall to the tires, he soon finds what he’s looking for. Two hundred and fifty thousand dollars, in cash. After weeks of watching and waiting, it seems that Mike has finally gotten his payday and vengeance against Hector Salamanca for threatening his family.

We catch up with a smirking Chuck as he prepares himself for a regulatory commission hearing on the Mesa Verde account. Smug is an understatement.

“I find victory laps very comforting,” he smirks, and off he and Howard go to the meeting.

Jimmy waits outside behind a tree. Coming to clean up any remaining evidence from last week’s shenanigans?

At the courthouse, Chuck shudders and twitches his way through the metal detectors before pulling himself together and standing before the Banking Board.  It doesn’t take long before the self-satisfied grin is wiped off Chucks’ face, though; there seems to be some confusion up front. 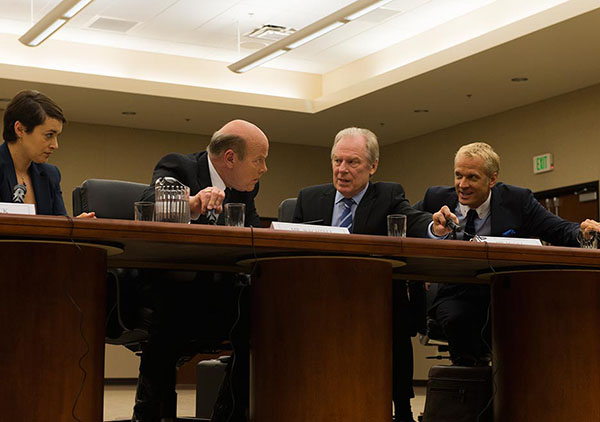 Jimmy’s subterfuge is coming to a head and Chuck is mortified. Arrogantly, he insists he couldn’t possibly have made a mistake, even worse, he insults his own clients by telling them they don’t know where their own bank is. “It’s 1261,” Paige insists with little love lost for Chuck and finally, he has to confess to his “mistake”.

But the board has already done their research on the 1216 address; the process will need to be restarted before they meet again. It’ll be six weeks. There will be no provisional approval. Kevin is furious.

At home and on the verge of a complete nervous breakdown, Chuck wraps himself in a space blanket cape and checks the files. But Jimmy’s been by already and has removed all evidence of his wrongdoings. Howard tries to reason with him and calm him down, telling him everyone makes mistakes. It’s a moment of clarity for Chuck.

“This was no mistake,” he says.

And make no mistake yourself; it’s clear Chuck is onto Jimmy. But how? Just his innate disdain for his younger brother? Or did Jimmy forget something?

Cut to Mike, who’s back across from the ice-cream store, and again, watching Hector’s crew. Inside, it doesn’t look jovial. Mike raises a pleased eyebrow and heads to a local dive bar where he flips through a thick stack of cash and buys a round for the house.

He’s the hero of the day!

At the dentist’s office, Jimmy and Kim remove the chairs and prepare to make the office their own. The sweet moment of domesticity is sure to be short-lived, but it’s a lovely little montage that surely foreshadows doom and gloom to come. 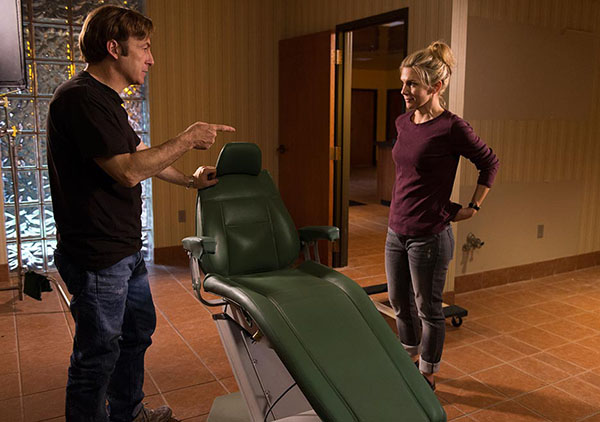 But for the moment, he does let Kim have them. She receives a call from Paige telling her she’s got the Mesa Verde account back. Kim is flabbergasted and Jimmy’s plays dumb and fake-surprised to perfection. In his defense, he’s genuinely thrilled for his ladylove.

The phone rings again and it’s Ernie, Chuck’s assistant. Chuck wants Kim to come over immediately to pick up the Mesa Verde files. It’s… quick, and I’m worried for Jimmy. What does he know? Jimmy offers to come along for the ride and Kim wonders if it’s to carry boxes or to gloat.

At the house, Jimmy tells Kim to ground herself and Rhea Seehorn’s face is priceless. I thought it deserved its own paragraph.

Inside, they find Chuck wrapped in his blanky and with the locks changed. Chuck was hoping to talk to Kim alone but since Jimmy’s there, he thinks it’s time to clear the air, one and for all.

“He sabotaged me!” Chuck accuses with the tone of an angered toddler.

He goes on to describe in precise detail exactly what he thinks Jimmy has done. The man has it exactly right and I have to wonder how he gained his superpower.

“That seems like a lot of work,” Jimmy says in his defense.

“No one ever accused you of being lazy,” Chuck parries. “Every other sin in the book, but not that one.”

“He did it for you,” Chucks tells Kim. “It was some kind of twisted romantic gesture,” and it’s pretty clear she knows it’s the truth.

“And now that you know, you have no choice,” he tells her. He wants her to make a full disclosure to Kevin from Mesa Verde. But Kim doesn’t look happy about Chuck threatening her, and Jimmy is defiant when Chuck claims Kim is “ruined”.

Kim seems pretty fed up with the both of them and in a moment of pure badassery, she takes them both down a few rungs. She wants him to show his evidence. He has none. Ramping up in her anger, she continues.

“I know he’s not perfect. And he cuts corners. But you’re the one who made him this way,” she growls. “He idolizes you, he accepts you. He takes care of you. All he ever wanted was your love and support, and all you’ve ever done is judge him. You never believed in him, you never wanted him to succeed. I feel sorry for him…” she says. Ouch! “And I feel sorry for you.” Double ouch.

Chuck looks like a broken man, and they leave, Jimmy following along with the Mesa Verde files. In the car, she punches him. Hard. Then she does it a couple more times for good measure.

Please give this woman any and all of the awards.

At an elementary school, we rejoin Jimmy who’s back to work with his ragtag film crew. They need a shot of him in front of a flag but they don’t have permission to be on school property. Jimmy being Jimmy sweet-talks and connives his way out of being thrown off the property by claiming it was the school of Rupert Holmes and that they are doing a documentary on the man. It’s the one light-hearted moment of the episode and we are treated to Jimmy singing the Pina Colada Song.

Now, allow me to treat you to the Pina Colada Song.

At the diner, Mike flirts with his waitress, Fran, and offers to shovel the snow from her driveway should it snow in the coming winter months. It’s kind of adorable and all is right in Mike’s world. Until the phone rings. It’s Nacho and he needs to talk.

Nacho wants to know if Mike was the one who hijacked the truck? Nobody else would dare to steal a quarter of a million dollars from Hector and then not have the nerve to kill the driver. Mike owns up to it. He wanted the money and to set the cops on Hector, and that makes Nacho mad. That means the cops are on to him as well. Nacho is on his way to talk to the driver. They believe Mike and he were working together but Mike assures him that he was working alone and that the driver saw nothing. Mike is gloating; he thinks he’s done such a clean job. But Nacho drops the bomb on that when Mike wonders why the incident didn’t make the papers. Nacho says they took care of it. A good Samaritan stopped to help the driver, who called Hector, who sent the team to clean up. By cleaning up, we are talking pretty damn dirty. The good Samaritan caught a bullet for his troubles and is now buried in the desert. Mike is crushed, an innocent man’s life weighing on his shoulders.

As they get ready for bed, Kim and Jimmy make small talk and discuss their day.

“Your brother is one smart lawyer…” Kim muses.

Jimmy agrees and begins to nod off

“He’d make quite an adversary…” she presses.

He cracks an eyelid.

“Going against him, you’d really wanna make sure you’ve got all your ‘I’s dotted and your ‘T’s crossed… nothing. for. him. to. find.”

And with that, Jimmy springs out of bed and grabs his car keys, message received loud and clear.

At the copy shop, it seems he’s arrived too late as he stumbles upon Ernie, talking to the guy behind the counter. Once Ernie leaves Jimmy goes in and gets to work. He knows Chuck will want to come and confirm what Ernie learned and so he offers Lance a stack of hundreds to forget he was ever there. For another two hundred, Lance will erase the security footage showing Jimmy was there.

“You will go far, my young friend,” Jimmy praises. And they have a deal.

As expected, Chuck soon arrives and Jimmy waits in the shadows across the street to watch it all go down.

Chuck’s clutches a photo of Jimmy and wants confirmation that Jimmy was there making copies. But Lance is loyal to Jimmy and changes his story, making Chuck begin to twitch under the pressure of all those electronics and bright lights. 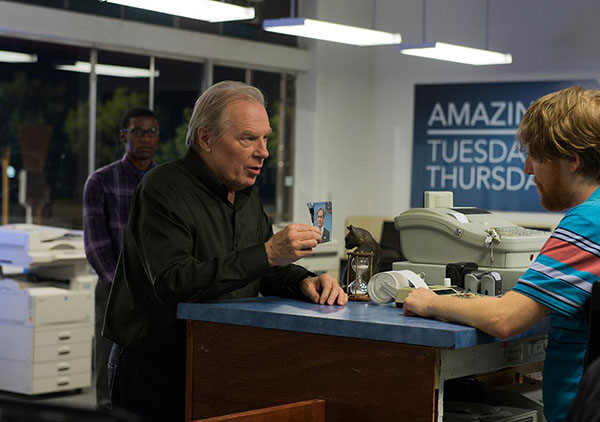 “That’s my guy,” Jimmy whispers to himself in the dark.

Lance holds up under the pressure and Chuck becomes more agitated. Ernie is worried for him but Chuck is arrogant as always and won’t leave without evidence against Jimmy.

“Do not speak to me as if I were a child. I’m fine,” Chuck snaps to Ernie.

But he’s not fine. Unsteady and barely holding himself up, Chuck continues to yell at Lance and push back at Ernie who is trying to help him.

“I know he was here! I know what he did! Tell me what you told Ernesto!”

Other customers need help and Lance is done with Chuck. Jimmy watches from across the street as Lance walks away. Reaching his breaking point, Chucks is dizzy, and he trips, smashing his head on the counter with a sickening thud and falling to the floor.

Across the street, Jimmy can do nothing but watch as Ernie and Lance uselessly try to wake him up.

The episode fades to black. And goddamn was this a good one. The slow burn of this second season is coming to an excruciating close and I both eagerly await and somewhat dread the conclusion.

Next week doesn’t promise to be very happy. With everybody’s plans blowing up in their faces it can only spell doom and gloom for the season finale. How will Mike cope with his guilt over the dead Samaritan? Will Chuck survive that brutal crack to the head? How will Jimmy assuage his guilt? And will Kim forgive him when she learns what has happened?