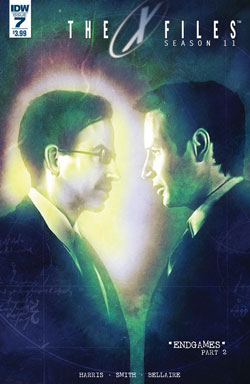 Last time we saw Mulder and Scully, they were at Camp Williams in Bluffdale, Utah. They’d been tracking suspicious activity that led them to discover that Cantus has been hiding a magnetite mining operation on the military base. Mulder had taken off with a whistleblower journalist to check out a possible entrance to the complex and Scully had stayed behind with the journalist’s partner. But things went awry.

Mulder’s sidekick gets controlled and killed by Gibson as he delivers one last threat and Scully gets attacked by the man with her who turns out to be a faceless alien.

Click after the jump for our recap and review.

Mulder climbs the embankment to go back to the entrance of the complex. Gibson’s narrative accompanies him; his plans are materializing, and he can control and predict everything but Mulder’s tempestuous reactions. He puts what he cares for at risk by doing so. Mulder goes to the guards that now surround their truck. They tell him to step back, their attitude confrontational.

A strike team moves swiftly, while Gibson tells Mulder that he’s being witness to a complex game of infiltrations. Many elements of his plans and others’ plans colliding at once. Meanwhile, the assault team moves closer and gets in position. Mulder is caught in the crossfire of an attack on the facility, between super soldiers and faceless aliens as the latter try to sabotage the shipments going out of the place. Mulder struggles to defend himself, catching a glimpse and following a surviving faceless alien. He’s weak because of the explosion in the area and Mulder uses this to his advantage to subdue him.

Then we land on a flashback to months ago when Scully found herself pointing a weapon and shooting at Gibson at the docks in Cuba. In the present, Scully wakes up from that nightmare. She’s in a hospital room and the staff rushes to her as she tries to get out of bed; she’d been sedated. The doctor wants her to take it easy, but Scully won’t have any of this. As she tries to make her way out of the hospital floor, she’s confronted with orderlies that stand in her way. She punches one, and sure enough it is a faceless alien. She rushes up the stairs, calling for Mulder. When she gets to the roof she realizes that she’s still in Utah, far from the place she left Mulder, but close to the Salt Lake City field office, as AD Morales informs her. She approaches the agent, they’ve needed to talk about “things” for a while.

At Teton Ridge Mall in Idaho, the Lone Gunmen are trying to hack into the mall’s Best Buy to connect to their WIFI internet. Langly has been trying to track the maintenance record of the trucks they saw at the complex to see if they could figure out their destination by this registry. Frohike traced links to Cantus through the whole operation, via the contractors and even vendors associated with the mining scheme. Their efforts make them believe that the true objective of their plan is ore removal and demagnetization effort. According to Byers, the magnetic material can be neutralized for transport and even so the dimensions of the operation are actually impressive to him. Frohike points out that’s only a motive for awe if you’re into betraying humanity.

Mulder assesses that this has to be Gibson’s plan all along, to leave the planet without defenses.

Byers has also found that the Department of Justice has been involved in the development of two additional mining sites in the past. One of the complexes is just a few hours from the Stone Haven mine he just escaped. Mulder stops by the side of the road, and the boys wonder where Scully has gone. He’s also trying to solve that mystery. As he parks and circles the truck he’s been driving and opens the back, we discover that he has taken the alien as a hostage. Mulder holds a piece of magnetite as a weapon and makes the man step off the truck and start walking with him.

Back in Salt Lake City, Morales lets Scully into her side of the story. They’ve been making advances into their efforts to cripple the nation’s ability to defend itself. She’s been working actively to sabotage from within, even when her own position within this conspiracy wasn’t always a lofty one. But her commitment to the cause is fierce, and she thinks that because of Mulder’s actions, he has walked into Gibson’s grasp unknowingly. Faceless aliens have joined them at the roof now; Scully fears that this building has been protected to block Gibson’s ability to reach anyone within it. She wants to know when Gibson’s plan will begin. When will the invasion start. But Morales leaves her with the faceless aliens and this parting gift. The invasion was begun already.

In the Northern Utah desert, the sun is setting and Mulder and the alien walk through the dry land. He announces that “this is where… it’s to finally occur,” but what will? Mulder asks and the guy sassies that mental his captor knows what he’s referring to. Mulder doesn’t care for that right now, he just wants to find Scully. Faceless wants to know what does Gibson have to say, but the man has been silent throughout.

They get to a drilling site; he explains how they’ve worked to fight Gibson off for years, trying to decipher his plans. Mulder anticipates that Gibson’s plans are just invasion. The alien points out that Mulder has even been helping his former friend inadvertently. Just then a car appears, a man climbs out, stabbing the alien with a piece of magnetite. He dissolves away not before giving one last confession: the faceless are the guardians, they’re only faceless when need be but committed to… The man stabs him again, finally silencing the alien before his complete confession. The man is Walter Skinner, but he’s being controlled by Gibson Praise. 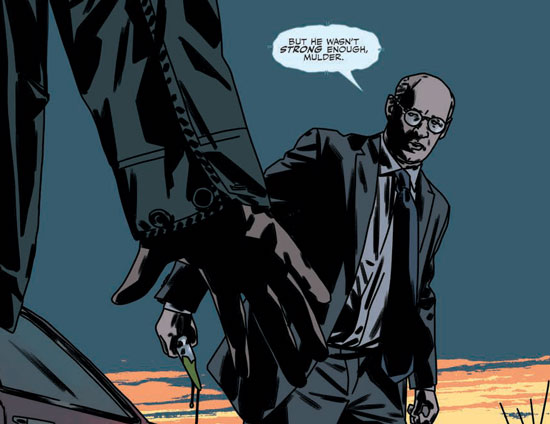 It’s interesting to continue reading these stories after the revival has happened. In an odd way, I need them to happen, because intended or not, they fill voids that were left. Thank you, Joe Harris! This story may not go along with the narrative developed for FOX's Season 10 - for now - but it does appeal to a personal favorite for me: the conspiracy.

In previous reviews, I’ve pointed out that sometimes following along gets confusing, sometimes it is just a thing with language and how these characters speak. But this issue improves on that. I especially liked the development in clarifying the roles of most of everyone in this story. Why is there a quarrel between supersoldiers and faceless aliens? Who works for who and why? What’s Morales really doing? And now, is Skinner being held captive or has he been sabotaging all along as well, controlled by Gibson Praise?

I have many questions.

One thing that made me laugh was the bit of humor with the Lone Gunmen, I really appreciate the use that Harris has given to these characters. They come to move the story along, not as fan service.

I am though worried about what will be of Scully now. If they’re the protectors, does this mean they will protect her? Or is she a threat they have to manage? Will any of them become expendable at any point, especially after the flash forward scenes of the previous issue?

Art wise this time around I was satisfied; my favorite panel is actually one that's so simple: Scully overlooking SLC. I can imagine it on film and is so cinematic. I did have an issue with the likeness of the faceless alien: he looked too much like Knowle Rohrer and that confused me. 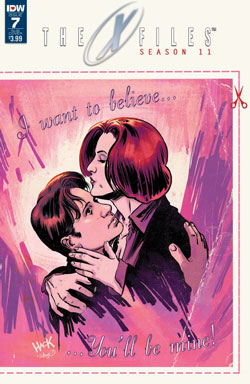 The covers, I’m torn between the Regular cover by Menton3 and the Valentine’s inspired one by Robert Hack and Stephen Downer. I think thematically, the regular fits better.

Don’t forget to reach out to the writing and editing team behind this production, at This email address is being protected from spambots. You need JavaScript enabled to view it. - and mark it as “OK to publish” if you desire to have a chance at getting featured in their letters section. As always the invitation is to continue supporting this comic by purchasing it on your local comic book store or via comixology.