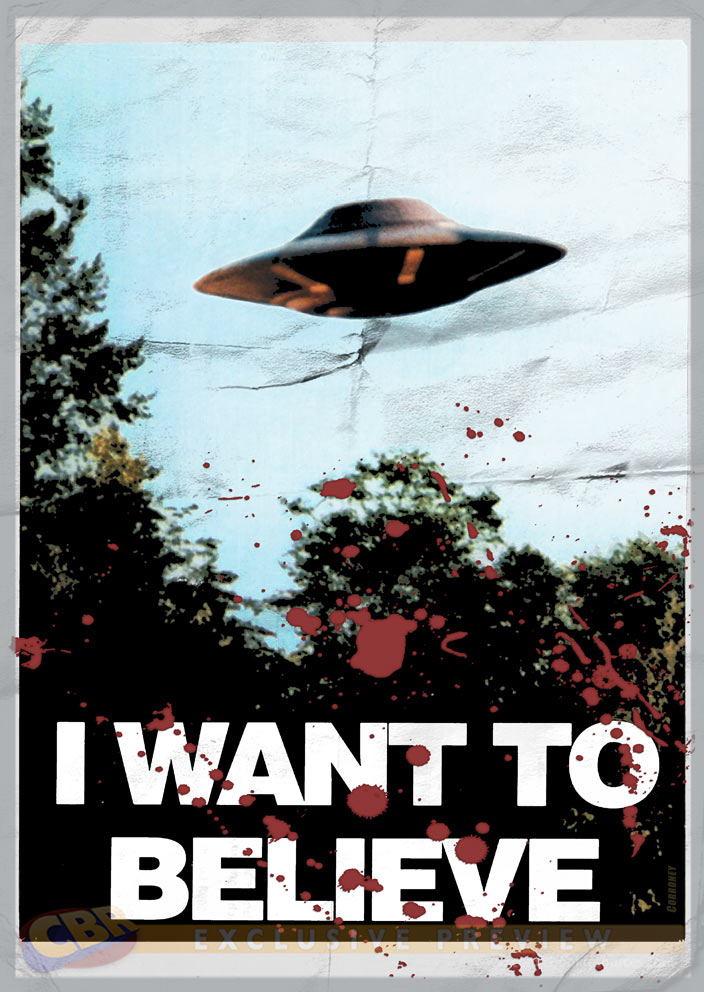 It was only this past January when IDW Publishing announced that it would be producing a new line of X-Files comics. It had been almost five years since the release of Wildstorm's seven-issue series in 2008 and three years since their collaboration with IDW to produce the 30 Days of Night crossover. With a new series of post-I Want to Believe comics, it was time for the return of Mulder and Scully.

Then March came around and news broke that Chris Carter himself would be taking part in the new series. He took on the role of executive producer--after all, he is the god of The X-Files universe.

Slowly but surely, cover artwork and synopses started coming out. We sat down with Cover Artist Carlos Valenzuela and got a look at some of his amazing artwork. And here we are, day of the release of The X-Files: Season 10.

After sitting down to read Issue #1, here's what we at XFN think.

(This contains is a synopsis, so if you haven't read the issue yet, you will be spoiled.)

IDW Publishing artist, Carlos Valenzuela, has released a new photo from the upcoming X-Files Season 10 Comics! Check out the cover preview for issue 2!

The first issue releases on June 19th, 2013, and yes you did read that correctly. It does in fact release on the 15th anniversary of The X-Files: Fight the Future.

Original formatting and pictures may be missing due to site migration.

I had ditched my partner, taken a small boat out to the Bermuda triangle, and jumped into a wormhole that took me back in time to...1957? Wait? That can’t be right... let’s check the news. A broadcast of 50’s happenings and fashion confirmed it, I was in the 1950’s.

As I sat there thinking how the hell I’d get home, who knows, maybe a sexy red head would show up and save me, a man came on the screen talking about a film, ALIEN TRESPASS  - it had been filmed in the late 50’s but never shown. Destroyed after negotiations fell through, this was top secret.

So secret, I later leaned that it was closed to the Cinematic Society of San Diego ‘Syndicate.’ As I was being corralled by bystanders I showed them my XFN credential but no one recognized the organization. Fortunately for me, my own bald beautiful man came to the rescue. NO, not Skinner, but the society’s Director, Andrew Friedenberg, who is coincidentally bald.

Soon in my hand, I had VIP tickets... and before he could change his mind, I ran through the corridors (of the theaters) and found my seat.

It was then that I realized I had NO IDEA what to expect! Never having seen a 50’s film before, I was a completely blank slate! Not to mention I was a decade or so younger than most of the audience. All questioning ceased as strangely familiar music pulled me back to the era. I felt like I was in a cutting-room floor version of ‘Triangle’ and had been mysteriously transported back to the 1950’s. I sat back and so it began.

A meteor shower is seen lighting up the night sky, but a certain blazing object is...well, Alien to the scene. It’s a spaceship that soon crashes on the outskirts of town, calling to it the fascinated Astrologist Ted Lewis (Eric McCormack). He is then sucked into the stranded spacecraft only to be returned, changed. The Body Snatched Ted is now inhabited by a galactic federal marshal named Urp.

Urp had been on its way to another planet carrying a prisoner, an evil erectile looking Ghota. Swank rubbery monsters with tentacles and a big glowing red eye, Ghotas are smart and this one had sabotaged the ship! Once on land it escaped into the unsuspecting city. The problem is that Ghota’s are as hungry as they are ugly, and once they eat enough humans, leaving behind oozing puddles, they reproduce asexually until they consume an entire planet and leave it as a wasteland. So it’s Urp’s job to track the Ghota down and bring it back.

Logically, he looks for assistance in Ted’s home, where his wife Lana (Jody Thompson) is confronted by a not so Ted-like Turp (Ted+Urp). “You are Lana, Ted wants you safe” and “You are Lana, you must assist me.” Finally convinced that Ted has had some kind of accident while going to the crash site, she leaves to call on the town doctor. Urp is thus left alone to complete his quest. He goes off into town with the locator on his totally retro laser stun gun to find the ever elusive Ghota.

Within the town are some other characters called to action by the mysterious crash. We have the Law; police officer Vern played by “X-Files” Alum, Robert Patrick, a womanizer who is hated by the local teenagers; the Sheriff, Dan Lauria, who comically had only one day left till retirement; and the waitress, Tammy (Jenni Baird), an aspiring artist who later becomes Urp’s willing and loyal ally.