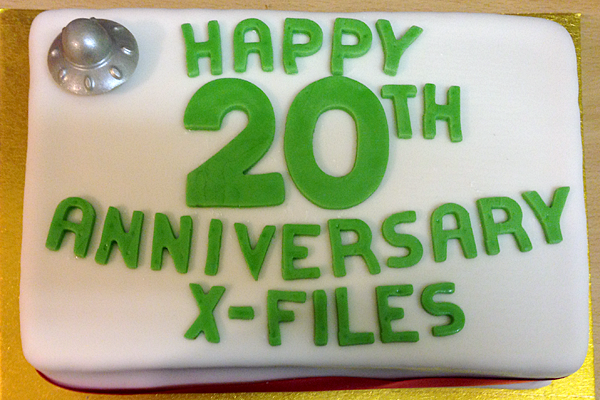 Agent Scully once said that "what can be imagined can be achieved, that [we] must dare to dream, but that there's no substitute for perseverance and hard work and teamwork, because no one gets there alone"; that is especially true of the X-Files charity event in Manchester that took place on October 13th, 2013.

The product of a few disgruntled British fans venting on Twitter about the lack of 20th anniversary events in the UK, the event was a resounding success and raised an impressive amount for Gillian Anderson's charity SA-YES.

I decided several months ago that it was one thing to complain about the 20th anniversary events schedule and another to actually stand up and do something about it. I approached SA-YES about the possibility of a fundraiser and Manchester's FAB Cafe about hosting a charity screening night; they graciously donated their venue to us for the evening. Countless hours sat sending emails resulted in some fantastic prizes for our raffle. Huge thanks go to La La Land Records, Erica Fraga who not only donated signed copies of her book LAX-Files but also sent over a number of uncut trading card sheets signed by dozens of show alumni, and Under The Floorboards. The limited edition posters donated by Under the Floorboards benefit the US neurofibromatosis charity, another cause close to Gillian's heart, so please consider heading over to their website and purchasing one if you havenâ€™t already. Without the prizes no one would have bought raffle tickets or quiz sheets so everyoneâ€™s generosity contributed hugely to our grand total.

During the night we watched several episodes of The X-Files on our big screen, kicking off the night with the "Pilot". "Bad Blood" brought the house down before our quiz uncovered who the true Philes were. Congratulations to team Tray of Death on their complete annihilation of the competition, I'm still shocked that you managed to answer some of those! Thanks also go to Keva Andersen in helping to compile the questions. Gillian sent over several signed items from 8x10 photos to old magazines and comics. After the quiz my co-host Julie Baron who came along to represent SA-YES auctioned Gillian's items off, more thanks to our guests for digging deep, bidding high and going out in the cold and rain to find a cash point! 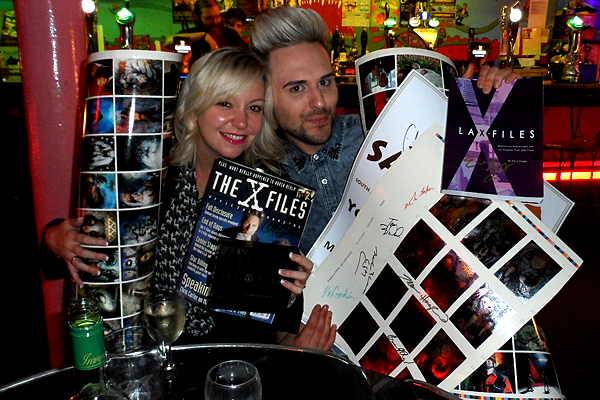 After our third and final episode - "Jose Chung's From Outer Space" - we were able to relax. Our special anniversary cake was shared with those guests who had stayed the night but only after a rousing rendition of "Jeremiah Was a Bullfrog" which I'm sure will be haunting us for many years to come. We also announced the total raised during the evening, an impressive Â£300, which will go a long way to helping disadvantaged youth in South Africa.

A great time was had in Manchester and as Julie and I left the venue at 1am the words "next time" and "next year" had already been uttered. It has been a wonderful experience working with SA-YES to run this event and I hope we are able to move forward and hopefully go bigger and better in the future. UK Philes - watch this space.