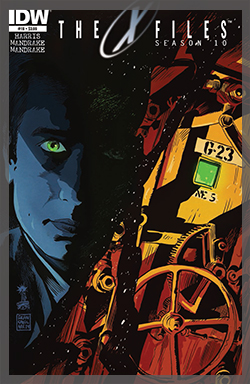 Announced as the "most offbeat X-Files story yet", this month brings us Season 10's 19th issue, titled "G-23". The two-parter coming out on December 3rd explores the past of some of the most infamous key players of The X-Files, and includes Mulder's time as a cadet. But let's not get ahead of ourselves and instead sink our teeth into this story as it comes.

For our spoiler filled recap and review, read after the jump.

"G-23" opens up in 1966 at a non-descript military installation near state road 375. A younger version of CSM and company arrive to remedy a breach in the complex. This place guards a dangerous compound. The substance and knowledge of it has been leaked to the nearby communities, creating rumors because of its hallucinogenic side effects.

A couple has been caught red-handed and is being held for observation. They plead to be released but there's no real hope for them. As CSM points out, the effects of the compound catch up, causing the girl to become delusional, reality is distorted and through her eyes, her boyfriend turns into an alien form; she panics and kills him right before them. She becomes even more violent and Bill Mulder shoots her right in the head. Sometimes I forget how little we know about him, and it's nice to take a peek into what kind of a person he could have been.

With the issue taken care of, CSM and Bill leave, but not before we see that the spread of the compound is not necessarily controlled... and it may be, actually, intentional.

Cut to the present. In Washington, D.C., a lighthearted Mulder awaits for Scully at a restaurant for lunch. He's disrupted by CSM, who taunts him to look into a sighting in the Nevada Desert. His father would have been diplomatic enough to bear the thought of working together, CSM claims. Mulder bites back. Which father is he referring to?

Mulder humors him still, checking out a psychedelic graphic that he provides. G-23 is mentioned on it. CSM claims that Bill Mulder thought that he'd destroyed the compound, but it seems that's not the case. Mulder doesn't humor him any further; he won't work with him, not as an ally or otherwise. 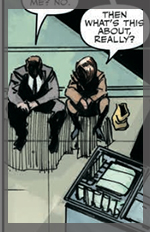 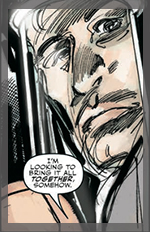 Having stood Scully up, Mulder shows up at Quantico hours later with a peace offering of the greasy bovine kind. As Scully digs into her burger, he brings up the governmental urban legend that's G-23. While Scully's aware of the stories, she's curious about the reason behind this newfound curiosity. Mulder claims that his father might be behind some of it, whichever father he's referring to. He needs her scientific abilities to help him bring sense to the story behind this particular chapter of Bill Mulder & CSM's business, so he gives her a sample of the compound for her analysis. I particularly liked this scene, the staging was very dynamic and imaginative in the ways the information was presented; the banter felt natural, carefree and fresh between Mulder and Scully.

Mulder also consults with the Lone Gunmen. Langley's theory is that this "Government Weed" was a way to undermine the "growing countercultural movement in the 1960's" via this powerful compound. In some ways, whatever real intention the government had with the creation of G-23, the project proved to be too dangerous; the secrecy behind it favoring much speculation, and the government resolved to destroy it. Additional rumors peg its demise to powerful reasons yet to be determined, but alternate sources say that the project is still out there.

Byers finds online the graphic that CSM showed Mulder earlier in the day. It turns out it's an invitation to a spot on the "Extraterrestrial Superhighway" in Nevada. Mulder heads over, of course. There he finds a large group gathering in the middle of the road. He tries to gather the attention of someone who can explain the event when he runs into Langley, who's followed to "back him up" - Mulder knows that this is more about the possibility to experiment G-23 first hand.

Just then, someone standing on a truck's stake bed begins a speech: the "event" starts as they begin being showered with a substance... Liquid G-23, sprayed directly on them. As the hallucinations begin to roll, distorting sounds and lights call the attention of the crowd, but it's not aliens or spacecrafts, but black helicopters descending on them and shooting. Everyone scatters, but the effects of the drug rain down on Mulder.

Everything seems lost; a car screeches to a halt near Mulder and he's about to get it as he pleads for his life. A pair of hands holding a pack of Morleys challenges Mulder's assumptions, as a smoking hot, cigarette-wielding Scully, complete with fishnet stockings, reveals herself, claiming that she's been waiting for him all day.

How is that for a hallucination?

Approaching this story, Joe Harris and IDW challenge the normal storytelling we're used to in this series, but you can't tell a story about psychedelic drugs without straying a bit from the norm, right?

The amount of secrets from the 60's and 70's are continuous fodder for stories when it comes to developing the past that involves CSM, Bill Mulder, the government and the syndicate. This is why it has been said so many times that it would be interesting, very interesting, to see a prequel to The X-Files. The origins of the many roads that put us at the door of Mulder's investigations are filled with stories worth telling, with challenging points of view that might not be so straightforward and easily categorized.

I personally found the structure and plot of this first part quite solid, even with the topic at hand and the licenses that the authors take to tell the story. In fact, I think even where there's a million ways to approach a subject, this is actually such an appropriate and attractive way to do it. 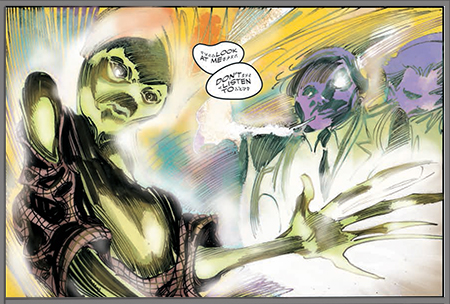 The alternative twist to this month's take extended even to the art by Tom Mandrake and colors by Sian Mandrake. If there was an opportunity to embrace different strokes, this was the one, and I'm glad that the chance was taken to heart. I think that as much as I've loved the "normal" art approach that we've settled on for most issues, this creative combination captured the playfulness and out-of-the-box concept that I sense Harris was going for in the story. The Mandrakes don't quite portray the characters as their recognizable selves in most panels, but on a second and third read it almost becomes a necessity for me. It evokes the youthfulness of the fourth and fifth seasons at times. It may be thanks to the way the characters relate to themselves or the ambiance, but I'm quite curious as to what the second part will bring to us.

IDW and Harris have hinted that this two-parter will take us to the times of Diana Fowley and some other milestones in The X-Files history, so it will be interesting to see the drug-induced trip Mulder takes to those realities. 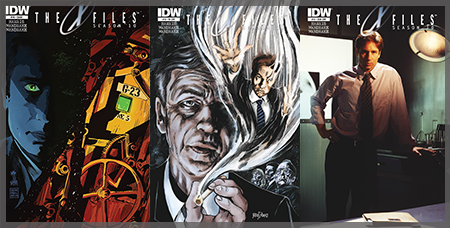 The regular cover by Francesco Francavilla was pleasing as always; come the end of the season, I'd love to have all of his covers together as a cool artwork display, they work great when you see them as they progress. The Retailer Incentive cover by Tom Mandrake and colors by Sian Mandrake is triptastic, as you can imagine, with this month's theme. I can't really pick one, so you do it. Rush to your comic book store, pick up your issues and enjoy.

See you next month, for a whole lot more. If you want to share your opinions about this issue with the creators, you can hit them up at This email address is being protected from spambots. You need JavaScript enabled to view it. and remember to title your email "OK to publish" if you want a chance to be featured in their correspondence section.