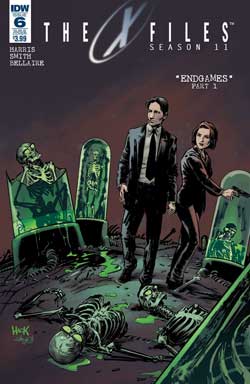 “ENDGAMES” Part 1 continues the saga for The X-Files: Season 11.  With the story released for the X-Mas special, Gibson “rescued” Mulder from the aliens and the government, and the Lone Gunmen had been abducted but also returned. We also saw that AD Morales now has a better grasp of what’s going on with Mulder and Scully’s alliances since she followed them and witnessed the exchanges at the end of the last issue.

But now… we enter a new stage in this story, one that catapults their reality to a much more daunting setting and according to Denton Tipton, editor of the series, the first of the issues that will carry us through an overhaul that aims to get this narrative in line with the current revival.

For our recap and review, you know what to do. 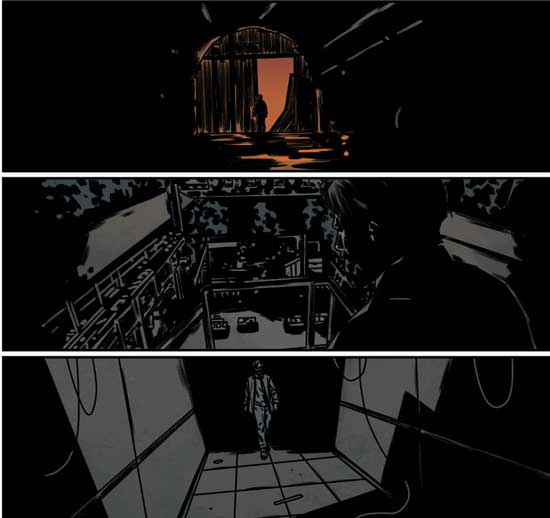 When we land on “ENDGAMES” - Part 1 we’re witness to the vision of a future apocalypse. Mulder’s monologue tells us how much men damaged Earth since the very beginning of time. This world that Fox Mulder walks is completely destroyed: there are freeways and buildings on fire, desolation, and horror as he makes his way through the dirty streets of Washington, D.C. He claims to remind himself of his own name everyday so that he can remember the passage of time and how life used to be before Mankind’s dominion over the planet was challenged. Those with the right skills survived, and with them, the promise of revenge and taking back the world that once was ours.

Mulder arrives at the Mount Weather Complex in Bluemont, Virginia.  This was once the stage for events that gave way to one of the most traumatic moments of his life: the trial that would ultimately order his death, resulting in his subsequent escape. It is quite the place to reminisce. The base is also abandoned, but for one tenant… or fourteen.

Gibson Praise has holed up in there and replicas of himself have been busy playing chess against themselves in a dark room that sports a board with numbers that could be timestamps. He’s been waiting for Mulder, who’s sporting a run down and disheveled look. The man is completely deranged, a madman, right away pointing a gun at the replicas.

Gibson is surprised by Mulder’s capacity to protect his thoughts. Mulder’s resolved to kill Praise and Praise considers his tenacity, to continue fighting even when he thinks that the game is over. Praise dismisses him, but Mulder won’t let him go, screaming, waving the gun and blaming him for what has happened to the world. Gibson won’t let him have his way; he takes the weapon away from Mulder’s hands to dare him to understand how futile it is trying to kill him.

Gibson starts shooting his replicas one by one; there isn’t a way to tell which one is the real one, or if even the real one is in the room. As the green puddles form on the floor, Gibson admits to being surprised that Mulder isn’t enjoying this more, seeing him suffer. But he defends himself; this wasn’t how it was supposed to happen. According to Gibson, Scully understood the game he plays. He’s obsessed with these strategies he plays out in his head and as he holds the gun in his hand, he wonders if Mulder had also planned to kill himself. 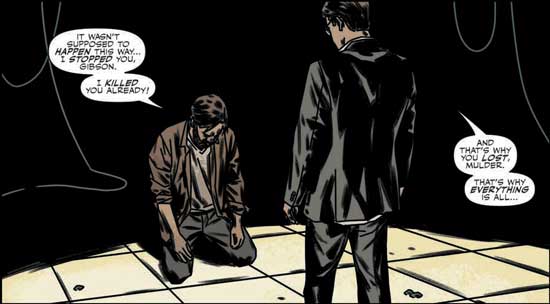 Mulder kneels, defeated; he has tried and thought to have succeeded in killing Gibson in the past. And this is the very reason why Gibson puts the blame of what’s happened on Mulder.

Back to present time, and Mulder and Scully meet with the Lone Gunmen in snowy Blackfoot County, Idaho. They listen to the tape that Gibson gave to Mulder but there’s nothing there. He theorizes it could have something to do with the WOW signal, that the frequency could be different… but there’s no certainty. Even Byers and Scully won’t humor him. When they examine the tape, they find that it isn’t commercial grade and the only thing they can find on it are the letters SHD.

Byers points out that it stands for Stone Haven Depository: the secret, big data central storehouse in the Utah desert. Cue Edward Snowden jokes. According to Langly, the depository is being expanded and the contractors are subsidiaries of the Cantus group, the sinister group we’ve learned about throughout the series. They suspect that they’re transmitting or receiving a signal at the complex and they plan to breach it by passing themselves off as contractors.

Mulder and Scully get to Camp Williams in Bluffdale, Utah. There they get to the security gate and use the credentials Langly has provided for verification. As they wait for clearance, a couple of reporters approach them. They’re a leftist-wing, curious couple that have been on the perimeter for a while. They warn Mulder and Scully about how secretive and cut throat they are about this facility. While they’ve been covering the ins and outs of this fishy operation and the woman has been trying to infiltrate the place, her partner, Brandon, has been hesitant.

They riff off about just how many conspiracy stories they know, while Mulder tries to get information on how to infiltrate the place. The woman is thrilled but Scully is definitely wary of these plans. Still, Mulder is determined to follow through and follows the woman to a storm drain that will allow them in, according to interviews that they’ve held with former workers. They get under the fence and head to the conduct; Mulder wonders just what kind of data center would have so much water pumped out. He sends the woman back to the entrance but she won’t leave, trying to get pictures and to have some proof. When he tries to call Scully, the calls don’t go through... And that’s when Gibson takes over Mulder’s companion to channel warning messages.

In this trance, he claims that the couple aren’t their friends, to watch out for them. He needed him to be alone so no one could block him from reaching out. He warns that the end of the game is coming, for strategies set up long ago. Mulder can’t stand him anymore, fed up with the man’s intentions, and questions why he is wanting more of him when he already has his own Data Center in the complex. But this is not a data center, and Gibson wants to keep it a secret. It’s actually a mine.

Scully tries to get a hold of Mulder as well, but her phone won’t work either. She’s also alarmed by the amount of trucks that are going out of the complex, carrying out materials. Brandon asks her if she’s been working with her partner for long and she comes up with the story that she’s new to the company, but the man knows who they are. They’ve made a tragic error going there - Brandon is a faceless alien. And in this complex they’re mining for magnetite.

And so, I have to admit that I’m really excited about this turn of events. I’ve been waiting for a storyline like this one ever since we started imagining a third X-Files movie and also the possibility of something along these lines for the revival. I hope that even when we’re supposed to go on some sort of reform for this series, Joe Harris can continue along these lines. Mulder and Scully fighting the apocalypse is my jam.

Now, I find it somewhat unsettling that I infer from Gibson’s conversation with Mulder in the Flash Forward scene that Scully isn’t alive… or at least around. The way the dialogue played out seemed to lead that way. It would explain why Mulder is in such state of despair and also why the possibility of killing himself was actually plausible.

I’m hoping that we get the space to flesh out the set of actions that put humanity in such dire straits because it’s an attractive story to tell.

One thing that I found difficult when reading this issue was just how convoluted certain pieces of dialogue were. I thought that being that English isn’t my first language, I was probably having a hard time because of that, but so was the case for a few readers that shared the experience with me. It’s beautifully written, yet, it took me about five times to fully get the metaphors and message behind some of the monologue.

Art and colors are, as usual, top notch for this team, and from the covers, my absolute favorite was the one by Robert Hack with colors by Stephen Downer.

Have something to say to the folks at IDW Publishing? Send your letters of comment (please mark “Okay to Print”) to This email address is being protected from spambots. You need JavaScript enabled to view it. or to their postal address: The X-Files, â„…  IDW Publishing, 2765 Truxtun Rd., San Diego, CA 92106.