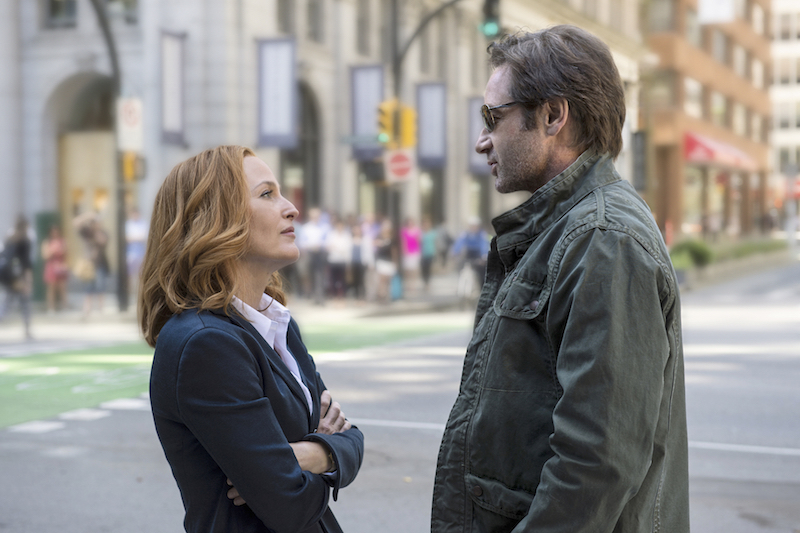 The new home video release of the new season of The X-Files has been out and about since June 14th. We’ve been really excited about the new chapter of the collection, not only for the possibility of binge watching it as much as our hearts desire, but also because we had the incredible privilege to be a tiny, little part of it.

But we’ll get to that. First, let’s walk through the goods included in The X-Files: The Event Series Bluray and DVD.

The Simple Look and Feel

The packaging and graphics for this edition are actually really nice. The main shortcoming for me in this area is the same I have about the previous boxset: the menus are not built to be easily readable upon the selection of an item and this is really bothersome.

Another technical aspect that bothers me still is the audio mix. During the broadcast of the show many noted that the underscore could have used more gain. Other than that, you have to love the crisp images of a show shot in 4K and delivered in Bluray.

The set includes the six episodes produced for the new season and are arranged in the order they aired. As usual, audio commentaries were included.

“Founder’s Mutation” with Jim Wong and Chris Carter is particularly informative about the production challenges that this episode gave the team. From working with stunts, children and money constraints, to working with the characters after such an extended break. It is really interesting to hear James Wong’s perspective about the plot of the episode, the William-arc, why he was excited to tell this story, and even his opinion that there should be a whole show about Walter Skinner! We wholeheartedly agree.

They even touch upon the switch of the episode order that happened during the season. According to Carter and Wong, they preferred to place this particular episode right after “My Struggle” because both touch on Alien DNA.

The commentary for “Mulder and Scully Meet the Were-Monster” with Darin Morgan, Kumail Nanjiani, David Duchovny, and Gillian Anderson is full of laughs, of course. While Morgan and Nanjiani’s commentary was recorded separately from Anderson and Duchovny’s, the track flows pretty well. Gillian shares her proud mom moment when her daughter Piper became an essential part of the art department of this episode, and Darin and Kumail have a nice philosophical conclusion about this episode. Duchovny’s jokes are quite hilarious.

Perhaps one of the remarkable parts of it is that David and Gillian’s chemistry translates even when just enthralled watching TV. This commentary is full of really interesting behind-the-scenes details that really makes it very rounded.

Then we come to the commentary for “My Struggle II” with Chris Carter and Gabe Rotter. Besides learning that Agent Einstein’s first name is Liz, and how much Anne Simon and Margaret Fearon contributed to the story, we also get a lot of details on the ambitious production carried out by the team. With 180 cars on that spectacular scene at the end of the episode, this has to be the dream of any production coordinator in Hollywood.

As in previous home video releases, we also have deleted scenes and the always enjoyable gag reel. These do not disappoint. Did they let more laugh worthy moments out? Yes, for sure. But we hear that time constraints prevented them from including more! There’s also a creepy short film titled “Grace” directed by Karen Nielsen, the show’s script coordinator.

The Green Production PSA was really interesting and it continues with the tradition and importance that Chris Carter has given to environmental matters. You might remember that for the release of IWTB’s home video we also had insight on what efforts were made to empower the crew to do the right thing and diminish their footprint on the areas that the production used.

Another treat, and a funny one at that, is the “Monsters of the Week” piece with Kumail Nanjiani. While our own list of favorite MOTW may be different or just plain longer, this makes for a good insight on the importance of these creations, and even a joyful look into Nanjiani’s take of what makes him a fan of the show. We particularly liked his use of the “Jesus Slug” and “Butt Genie” terminology. 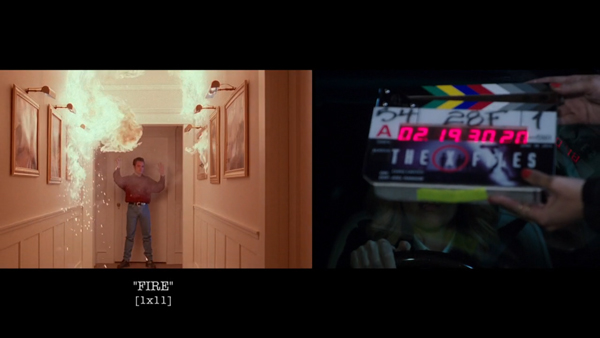 Julie Ng is the documentarian behind “43:45” and “Season X.” A great fan of the show, she found herself in the enviable position of hanging out with the production team and the cast for months. This epic trip resulted in these two very detailed documentaries.

The first - “43:45” - tells the tale of shooting the first X-Files episode after thirteen years, complete with cast and crew impressions of how it felt to come back, as well as fans of the show giving input into this return. Personally, I found it really touching and rewarding to see the investment behind the work. There’s a side to this process that we never get to see as normal spectators and this is a great opportunity. The piece carries you through until the premiere of “My Struggle” at New York Comic Con and documents the excitement of the fans being the first ones to see new X-Files.

“Season X” explores the season as a whole. Cleverly organized by the original order of episodes, and explaining the creative process of each writer-director, it gives us their own commentary about the episodes they created. The documentary also touches upon the efforts made to make this season happen; from the fandom to Chris Carter, from Duchovny and Anderson and the studios, it tells a succinct tale of years of efforts to get the show back on the air. It is a weird experience to be sitting on a chair and walking down memory lane and realizing it finally happened, believe you me.

The documentaries are a great window to what it meant to produce new episodes in the era of booming social media and technology, in a world where 9/11 seems like a distant tale and Snowden and serial hackers are the current threat. They’re full of callbacks and hidden treasures for the nitpicky fan, and even touch upon the things that never made it to the screen, like the infamous seventh episode, written by Gabe Rotter and Brad Follmer. Perhaps in season eleven? We didn’t get to have any tales from The Lone Gunmen, but do not worry, they try to explain to you what’s behind Mulder’s mushroom trip.

Actors give plenty of insight about working with the directors and even coming to terms with difficult scenes and what entailed to make them happen. My favorite and perhaps most honest story is Gillian Anderson’s during the shoot of “Home Again.” It speaks of how personal it is to tackle this craft. Likewise, we also learn what it is to create new pivotal characters like Sveta, Einstein, and Miller while making the creative choices to bring back Reyes and CSM in the surprising way the characters were returned. I could go on and on about these productions, but we prefer you check them out.

Chris Carter was also taken by the work put on these one-of-a-kind pieces: “We were very lucky to have Julie Ng documenting the entire process, not only because she is a gifted documentary filmmaker, but also because she is a true fan of the series. Her love for the show is evident in the great work she did.”

And so, it’s great to be part of something that exudes dedication, uniqueness and ambition. Having the opportunity to discuss the show with Julie and her production team was very enlightening and rewarding. We at XFN would really like to take a moment to thank her, and the folks at 1013 Productions and FOX, for allowing us to be an infinitesimal part of this documentary. It feels like a great way to mark the end of a push that involved many and we hope that our participation represented this fandom in a fair way. We loved that the responsibility of curating these works was put on a genuine X-Phile and having the opportunity to look back at what feels like an 8-years long marathon.

The X-Files: The Event Series is available in DVD and Bluray at most US vendors, and many other territories.